Go Outside and Play! 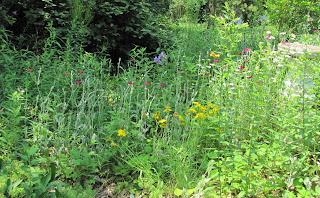 When I wasn't outside, playing in the woods or climbing trees and building treehouses, riding my bike or otherwise being a kid, I was upstairs in my room either sewing doll clothes or sitting on my windowseat, reading. When I could get away with it. Mama would find me and I'd hear it. "Go outside and play!" if it was a nice day. I'd usually drag my book and blanket outside and hide somewhere to read, if it was a good book. (I knew if I didn't get out that door, she would put me to work and I'd be scrubbing woodwork or helping can something, or worse yet, ironing.)

Still today it's a tossup whether I would rather read, or be outdoors, or both. So when I found three good books at the flea market yesterday, all of them about the outdoors, I was in book heaven! They are all from the 1970's, which isn't all that long ago, but classics as the word goes. All "coffee table" size books, full of pictures by lots of text. One is "This Good Earth", a collection of articles from Audubon, and fascinating reading with wonderful photos about the natural world.

Another is "Harvest of a Quiet Eye, the Natural World of John Burroughs", one of the most eloquent nature writers of the 20th century, though now largely unknown by this genration. He was a contemporary of poet Walt Whitman,  natural history writer Henry Thoreau, and naturalist explorer John Muir. What distinguished company! He also made a highly publicized tour of Yellowstone with Theodore Roosevelt, which might be familiar from the PBS series on National Parks of this past year; and went camping with Henry Ford and Thomas Edison. His was a quiet fame that lives on in his writings, and hopefully this generation and those to come will rediscover them and come to love them as well. I remember reading his writings as a child, laying with a blanket under my tummy and a forsythia bush for a room, soakiing up his clean, descriptive phrases and getting my grubby fingers all over the pages (much to the dismay of the local librarian, I have no doubt!) of "Wake Robin", in particular, and one about bees and honey and sharp eyes that sticks in my mind still. I'll have to hunt them all down and read them again.

The third, "John Muir's Longest Walk", by John Earl, traces his thousand mile walk to Florida in 1867. For those of you who are familiar with John Muir, you will know that he was the father of conservation, founder of the Sierra Club and explorer of Yosemite, Sequoia, Kings Canyon, Mount Rainier, the Petrified Forest, Grand Canyon, and Glacier Bay. There was much coverage of Muir's travels in the PBS National Park series also. There is a California state park in his honor. John Earl, photographer, traced and photographed Muir's thousand mile walk, in 1973, seeing things through the eyes of John Muir himself. Text is by John Muir himself, taken from a book that was published from his own journal. I have just glanced at this one so far, but it looks fascinating and I can't wait to read it thoroughly. "I only went out for a walk," he says, "and finally concluded to stay out till sundown, for going out, I found, was really going

"The universe to me  is a grand spectacle that fills me
with awe and wonder and joy,
and with intense curiousity."
---John Burroughs
Posted by Isadora at 11:27 PM