A Walk Out Beyond: The Remaking of a Forest

Twenty-seven years ago in April when I first set eyes on the acre where I live, with it's blooming tulip magnolia and lawn full of violets and buttercups, I knew I had come home.  Didn't much matter what the house was, I wanted that tree! 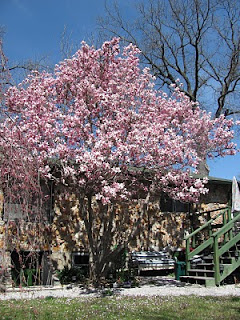 The stone cottage with seashells embedded in the walls was just a bonus. The woods was a tangle of honeysuckle, euonymous and poison ivy, with a variety of oaks, hackberry and elms, a couple of old apple trees and a small struggling peach, all that remained of a once thriving garden and orchard, along with patches of gooseberries. A jungle of mock oranges was in one corner close to the cottage behind an old frame, one-room house that was falling into disrepair. An ancient smoke tree, a red dogwood and a young hawthorn graced what was a sort of a lawn. It was going to be a lot of work!

But down the street and directly behind my woods, there was a two-acre lot that was kept neatly mowed by absentee owners; with a wet-weather drainage stream in the hollow and huge old oaks towering on the hilly slope above it. It was spring; the grass was studded with a zillion wildflowers; anemones, adder's tongue, violets, buttercups and hundreds more tiny spring flowers. It was heaven!

My neighbor to the south kept his lawn and the acre behind his house, which adjoined the meadow, neatly manicured as well, with more old oaks probiding shade.

And it stayed that way for several years. I loved it, loved to walk through that lovely meadow with the flowers and birds, into the woods beyond that, which had been let grow for many years and had majestic 300 hundred year old oaks, mayapples, mossy creek banks and a huge patch of blackberries, the remnants of a once thriving, pick-your-own berry farm.

But alas, things change and soon disaster befell this little slice of Eden. I was never sure why, though I did ask questions but got no clear answers. It might have been because the owner got tired of keeping it mowed, or sold it, but one day trucks began dumping huge quantities of fill all over the pristine meadow; huge pieces of concrete and rock and clay until in some places it was nearly 3 feet deep, from an excavation which was going on for a new highschool. That was the end of it ever being mowed again. And it was disastrous for the venerable oaks, having their roots buried under tons of debris. It took 4 or 5 years for them to die, but the aged giants began to topple over, one after another, leaving tangled branches and trunks on top of the chunks of concrete and tall grasses that now filled this once serene place. It was painful to watch the honeysuckle and poison ivy take over, smothering  everything. The wet-weather drainage was filled with four feet of that crap, damming up the neighborhood drainage to the north. Since we are not in the city, there were no codes in place to stop the dumping, and it went on while we stood by helplessly. After all, it wasn't our property.

Shortly after that, the mature woods on the other side was brutally decimated when the (different) owner decided to build apartment buildings where they stood, and cut down all those wonderful oaks, selling them off to someone who manufactures pallets. (!!!) It too soon became an impossible tangle of honeysuckle and brush, the woods gone. So was part of the noise buffer the trees provided between us and the freeway
half a mile to the south. The apartment house never materialized as neighborhood opinion quickly quashed that. We circulated petitions and showed up en masse before the city council (that property is in the city limits, just barely) on the day the permit hearing was held. The permit was refused, but it was too late for the woods. Then he decided to build a single dwelling there, and began building up part of that land with fill dirt and debris also, until there is now a mound some 50' high. Most of the blackberries are covered up and it is truly an ugly sight. I will spare you that picture. Finally the city put a stop to the dumping because of neighborhood complaints, and nothing more has happened to it. I am sure the owner will never carry out his plans. He just laid the area to ruins.

Soon after, my south neighbor died, and his back acre fell into neglect with no one to care for it. It grew up into tall grass and weeds, the house rented out to a string of tenants, none of whom have been into lawn maintainence. It began to blend with the ruined meadow and now seems to be a part of it.

Life goes on. The land has been lying fallow for the 15 years or so since the first dumping went on behind us, in the area we now call Out Beyond. It is still covered with honeysuckle, and the ice storm of '07 did further damage to the remaining trees, littering huge branches everywhere and felling some more of the weaker trees, which still lie. 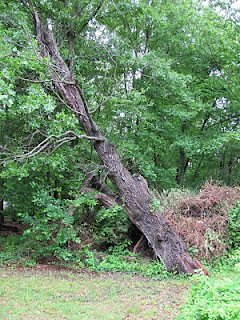 What's left of the last big oaks to decline and fall. It took 10 years for this one to die.
Most of the concrete chunks are covered now, the stream has cut a new path and drains the area once again, and there is reforesting going on, with young oaks and hickories growing tall. Some old oaks that didn't get buried still survive, though many are slowly declining, providing woodpecker homes in dead branches. 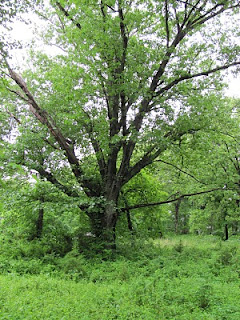 Wildflowers have sprung up once again, and though the meadow is gone, early spring brings them in huge patches among the red cedars that are popping up by the hundreds. Soon there will be a cedar woods here. 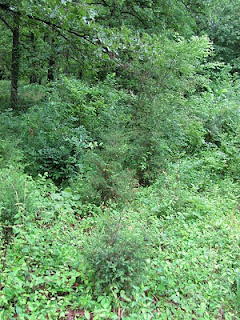 What is most interesting is that there are tree species growing tall that were never there before. Lilacs, both white and purple, bloom in the spring. Everything must have been seed-planted by the birds and animals, or the seed blew in on the wind. 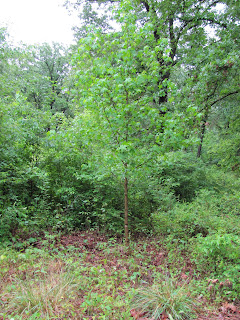 A young sweet gum, tall and beautiful, grows next to the stream.

A sycamore or two, several wild pears, cherries, a cottonwood, lots of elms and hackberries, to be expected, a few young maples, and a young white pine is thrusting its way skyward among a mess of honeysuckle. There was another, but the deer stripped the bark and killed it, which is why we haven't cleared the vines around the survivor; to restrict access to it. It seems to be growing well anyway and is taller than I am. 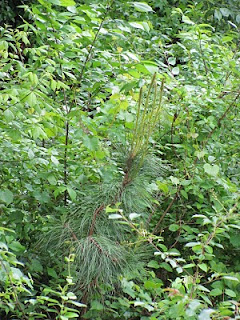 Blackberry patches have established in the sunny areas where there were oaks, and a huge patch of wild strawberries has come. It is on its way to becoming a beautiful forest once again, although completely different in character from what it once was. One day the sycamore, cottonwoods, pines, oaks and other trees will be mature and shade out some of the rampant undergrowth. Right now it is home to scores of birds; bluebirds, woodpeckers, hawks, creepers, thrushes, robins, jays and more, and teeming with wildlife including the damn raiding deer, groundhogs, foxes, weasels, raccoons, possums, and who knows what all else. 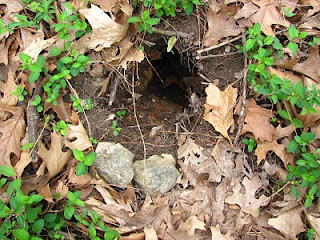 Wonder who lives in here? Groundhog, maybe.
It is beginning to be a wonderful place again. We keep a path mowed through it so we can walk there, and into the woods further Out Beyond. On Earth Day we found a young weeping willow on sale for half price, and planted it directly behind our woods, in the hollow next to the stream. Hopefully it will have a chance to grow.
That is, if it is left alone. The danger is not over to this plot of land. It was sold to someone who was going to build on it, some 10 years ago, and then changed their minds. There is only one small area to build, because the lower area is a natural drain that fills in the spring, and there are no utilities or sewer service there. Not worth a contractor messing with, and the adjacent woods are not for sale, at least while our elderly neighbor still lives. Who knows what her inheriting children will do?  Now it is for sale again, and has been for several years, but the asking price is so high as to be laughable, or else we would have purchased it long ago to keep anyone from building there.
I have been slowly moving some of the wildflowers to our own property, in advance of any bulldozers or brush hogs that might suddenly appear, because one never knows and we don't want to lose them completely.  We walk the paths with a pair of pruners, and cut honeysuckle out of some of the trees to keep them from being smothered (they do deserve a chance, after all) and spray some of the poison ivy with Roundup to keep it from spreading into our woods as I am severely allergic to it. I intend to keep the biggest patch mowed so it doesn't come back, and that is under the sweet gum tree. And hope everyday that no one buys it, or that the owners should suddenly drop the price to within reason so we can snap it up. 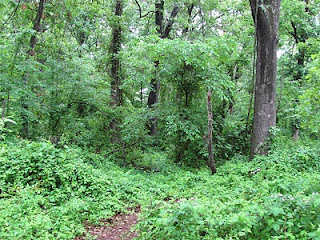 Looking into the woods back of Out Beyond
As for the other woods, with all the fill on one side, the trees are beginning to grow back there somewhat also, though the old sassafrass and some of the remaining oaks are now under tons of dirt and concrete, as well as most of the blackberries. We have weed-whacked a path through about 4 acres of it, behind our elderly neighbor's house (she owns part of it as well as another neighbor down the street), so we can hunt the morel mushrooms that thrive there, and enjoy the wildflowers in that woods also. Hawks nest here, and we found a turkey vulture roost on an old dead tree the last time we were walking  One day soon we will go back at dusk for pictures, when they are coming in to settle for the night. Deer live here too, in about a three mile stretch of forest along the interstate. 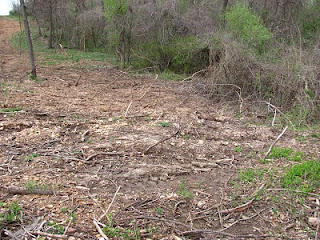 Which is another story: the state highway department has clear cut and bulldozed an area along the interstate, leaving a huge, scarred, rocky, muddy mess along the outside of the woods, with downed trees like jackstraws left to litter the forest edge, further reducing our tree buffer zone. I assume they did that to deprive the deer of cover from which to jump out in front of cars and trucks on the highway. This area is where I find a lot of the moss to transplant to my woods. I wish I had gotten more before the bulldozers came and plowed it up. But even there, a recent walk found sun loving wildflowers springing up everywhere. 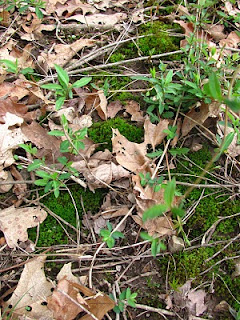 This moss is going home with me on my next woods walk. 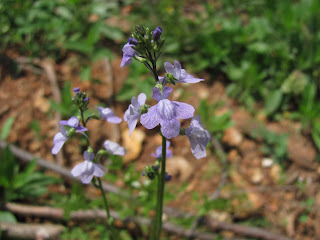 Unidentified wildflower (need to look this up)
Nature has a wonderful way of concealing scars.

"Naure is a mutable cloud which is always and never the same."
Ralph Waldo Emerson
Posted by Isadora at 11:12 PM