Every time I get to thinking of Chaos in the Parrillel Universe that is this garden spot, as MY garden, I get gently reminded that no, I'm just the caretaker here.

A while back in early summer, The Digger decided he didn't like an old Pfitzer juniper that has occupied a corner of the stone wall for the last 25 years, and he was right. It was half dead, besides being a prickly uncomfortable thing, so it had to go. And with it, a thick bed of euonymous ground cover that had taken over the corner, plus some Japanese honeysuckle that had sneaked in and was tangled around an overgrown pyracantha, which had also way outgrown its bounds. A couple of weed trees, a male mulberry and a hackberry, had insinuated themselves next to the wall and gotten tall enough to cast a disrespectable amount of shade, because the corner was a tangled prickly mess no one wanted to deal with.

When all the above was removed, pulled, chopped, and tamed, a Foster holly was set in the corner to provide an evergreen anchor to that corner of the yard, and I planted a flat of mixed periwinkles in front of it for a temporary spot of color until next spring when I can plant perennials there. With all that tall junk gone, it now was a full sun spot and the periwinkles soon reached lush heights and blazed with hot, happy summer pinks, whites and reds, glowing and growing through the August heat and drought without wilting a leaf. It was so pretty I may have to change my mind about perenials and just plant periwinkles there from now on! 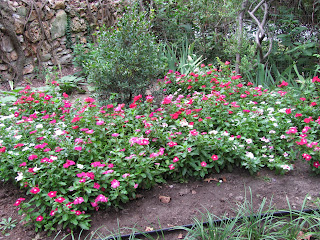 July
And here came the surprises. Once upon a time, some 50 years ago, or so my neighbor to the south at the bottom of the hill tells me, the Lady That Planted the Garden grew hollyhocks in that corner that she could see from her porch, 2 doors down, blooming tall over the wall. Apparently, with pulling out all that euonymous and disturbing the soil, hollyhock seeds that had lain fallow for all that time were brought to the surface (they need light to germinate) and, germinate, they did! I first noticed them as I was pulling out pigweed and other undesirables, when to my astonishment, I saw---baby hollyhocks! There were some half dozen of them, tiny and hopeful behind the holly tree! So I left them. And they grew, oh my how they grew!

October
Plants are beginning to fill in, this should be spectacular next year. There are tall phlox, thalictrum, paracanda, echinacea, mums, golden yarrow, a variegated miscanthus, daylilies, a sprinkling of daffodils, irises, and a winter jasmine on the wall. A row of white flowered mondo grass edges the front, hopefully kept in check with a strip of landscape edging which will be invisible as soon as the plants grow a bit. Hardy geraniums are planned where the periwinkles were. All of these plants were divided and moved from somewhere else in the gardens except the chrysanthemums, which will have cuttings taken next year to be planted elsewhere. (Quick tip: can't remember what color of mums are where? Take a picture or two for reference. I always tag them, but tags get lost.)
You can see the hollyhocks in the back. 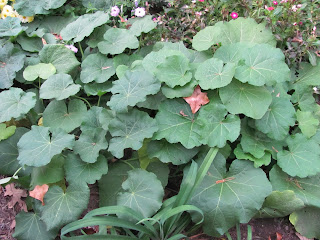 November
I didn't put anything here for scale, but these plants are huge! They are overtaking daylilies and mums that I actually planted in this corner. 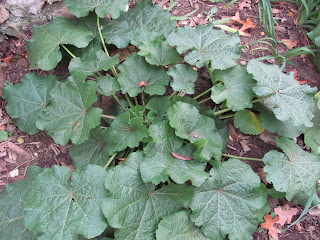 This one is about 5' across in it's first summer. I can only imagine how tall they will be next year! 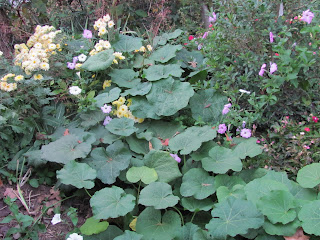 Another surprise: This bed is also full of volunteer petunias. Since I have never planted petunias here, the seeds must also have been banked up in here for all those years. I love these old petunias that reseed and come up every year with no help from me.
Next spring, I will plant an antique climbing rose on the wall, yet to be decided upon, to spread across the top of the wall. Once there was a Seven Sisters rose here, but long ago it was shaded out by big lilacs that grow to the east. One cane of it rooted on the other side of the wall and now blooms in the neighbors' yard. I may have to go and get a piece of it.
Even though she left long ago, the Lady continues to surprise me in sprit with her gentle inheritances. I'm sure there will be more to come.
"He who shares the joy in what he's grown
Spreads joy abroad and doubles his own."
----Anonymous
Posted by Isadora at 2:52 PM