There are Vegans in the House! 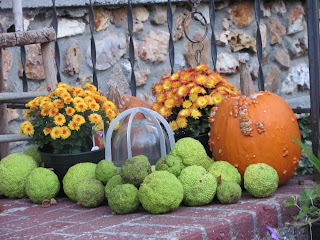 Thanksgiving is two days away, and there are vegans to cook for. Now, that thought might strike terror into the heart of a cook that caters to a bunch of hard-core carnivores, but I've been doing this for years, and I think I might have it down pretty well. Other than the turkey, one batch of gravy and the deviled eggs for our family's carnivores, the rest of the dinner will be "vegan". I put that in quotes because that term is often misunderstood by mainstream traditionalists and conjures up thoughts of tofu, salads and tasteless veggies, but that ain't necessarily so.

Just the opposite, in fact. There aren't any rich cheese and sour cream dishes, to be sure, but that isn't healthy, anyway. There are many "mainstream" meals that don't use dairy, eggs, or meat if you think about it. Many recipes can be easily made vegan with just a few adjustments, and also healthier for you at the same time. My daughter makes a bruschetta to die for, and oh what she does with pasta! but that is another story.

It has become second nature to reach for miso soup in place of turkey broth for the dressing, olive oil instead of butter, coconut or palm oil in desserts instead of butter, Veganaise dressing base for the Waldorf salad, and soy or almond milk instead of dairy. And really, it doesn't taste any different, and if we don't mention it to our other guests, they never know they are eating vegan-friendly food that is actually healthy for them; and there is butter on the table for them or they can use olive oil, Mediterranean style.

On the menu at our house this year:

The Cushaw squash soup is scrumptious this year. I made a really big batch so I would have some to put in the freezer for quick and tasty winter meals. Cushaws are an heirloom variety, green and white striped that can weigh up to 20 lbs. It has a fine, grainy yellow flesh that is delicious in soups.


The recipe: It started out as a sweet savory apple squash soup, but of course I had to tweak it, and made it up as I went along.

Preheat oven to 450F. Line 10" x 15" jelly roll pans with foil. Place squash halves, cut side down, in lined pans and roast about 45 min or until very tender when pierced with fork. Cool until easy to handle, scoop squash from skin and place in large bowl. ( I found that the thick, solid neck of the squash took longer to cook than the hollow body, so I cut them in half and let the necks bake longer until done).

At this point, because I don't have a huge kettle, I divided my apple mix in half and put one half into another 5-6 qt pan and divided the remaining ingredients, half into each pan.

Add miso, water, and squash to saucepot, cover and heat to boiling on high. Reduce heat to low and simmer until everything is really tender and mushy. I stirred them a lot to keep it from sticking. Ladle squash mix into blender with center part removed to allow steam to escape; (I let it cool some first). Blend until pureed. Pour into large bowl. Return all soup to saucepot and heat through. Ladle into soup tureen. Serves a big crowd or freeze in meal-size portions.

To make fried sage leaves: heat about 1/4 inch of oil in a small sacuepan until hot and "shimmering". Add 5 or 6 medium-size sage leaves at a time and stir 5 seconds. With slotted spoon, quickly transfer leaves to paper towels to drain. Cool completely. Leaves will crisp as they cool. You can fry leaves a day ahead and store in airtight container at room temperature.