Unsolved Mystery: the Rock That Came From Nowhere 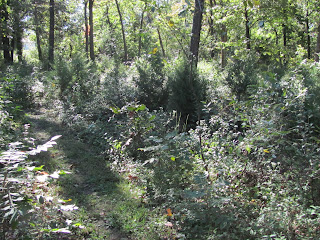 I spend a lot of time wandering about the overgrown, honeysuckle cloaked woods that lie past Out Beyond, along the interstate; watching the birds, hunting mosses, making trails, gathering morel mushrooms in the spring, walking meditations, sometimes just being in Mother Nature's's sacred space. I know that woods intimately, every tree, every stone, every groundhog hole, every hawk nest and fox den. So it came as a complete and astonishing surprise one day to find a huge stone, what in this Ozarks mining country is known as a mineral egg, lying on the ground where it was not the day before. A "mineral egg" is a type of geode, often round or egg-shaped, sometimes hollow in the center but when it is solid all the way through, it is called a nodule. Usually they are pretty small. I had never seen one bigger than my head, but this one is some 60 or 70 lbs, and at least a foot and a half thick, maybe 2' tall.

No idea where it came from. I thought at first possibly from the direction of the interstate, maybe it had rolled down hill when the state highway mowers came through with their brush hog, but that was too far away to be realistic, besides there was too much brush in that direction. Down the hill from the back neighbor's property into the shallow ravine where it came to rest? Except there is a fence. Down the hill in the other dirrection from the woods? Noooo, I would have already found a rock that big. There was no sign where it had been settled in the ground, it was perfectly clean all the way around, resting on top of the dry leaves in the ravine. There was no sign where it had rolled down any hill, no crushed plants, no broken limbs, no disturbed ground. It was as if it had materialized from another dimension or floated gently down to earth from the sky.

Having gotten previous permission from my elderly neighbor who owns the neglected woods to collect interesting stones from her property, it just remained to figure out how to get it home. It lay there a couple of weeks (during which time I fully expected it to have disappeared as quickly as it had come) while I thought about the logistics of carrying it, before I had a duh! moment. It's round! Round things roll!

Even as big as it is, it came home pretty easily with me. Being nearly round, it rolled very well up the side of the ravine, up the trail, and halfway home before it got stuck behind a deadfall log that I couldn't lift it over, and Jim came to help get it the rest of the way. 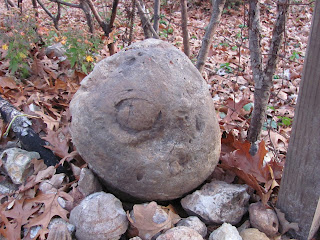 It now has a place next to the gate by the lower pond, where it keeps company with others of its kind, though much smaller; that came from a pile of stones with much less mysterious origins under a tree in my front yard. 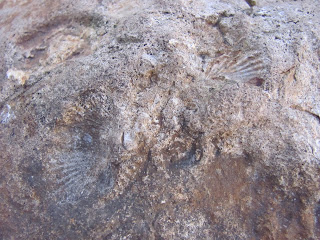 When it was formed from the mud millions of eons ago, it rested on scallop shells that left fossil imprints on the tip, like a bow. How cool can that be?
Do you see a face in here? I think it is smiling at me!
I'm certain I will never know how it materialized in the woods like that. But it seems very much at home as guardian of the gate!
"If there were no mystery to explore,
life would get rather dull, wouldn't it?"
--Sydney Buchanan
Posted by Isadora at 10:27 PM