How I Spent My Summer Vacation

Ah, January! That longest of months, when the lengthening of days seems so gradual as to drag on forever, and the cold insinuates icy fingers under the edges of even the most insulating garments, frosting digits and  turning noses to icicles.  Summer vacation seems a long, long ways back and the heat brings a nostalgic longing..........

It was a long, hot, dry summer in the Ozarks, the heat rising from the city sidewalks like a living thing, wafting up legs, turning skin to dry scaley crepe paper and inciting the pour of perspiration that plastered hair and clothing damply to bodies and skulls, only increasing the feeling of heat instead of coolness. The sharp, hot, acrid smell of dust assailed sinus cavities, carrying with it grains of sweet pollen that caused sneezing fits to add to the general summer discomfort. In the garden, hoses lay like sinuous green snakes along paths, slithering among plants to rear their yellow, cobra-like sprinkler heads that ran non-stop, causing the water meter to whirr at a dizzying pace and dollar bills to fly out of checking accounts.. If there was a bit of shade, it too was hot, just providing a bit of respite from the unrelenting sun that scorched the earth.

Too hot to garden, except for the most necessary weeds and keeping things in pots watered; but even cold beer and good books only entertain just so long before ennui sets in and  restlessness goes looking for projects.

Projects are things that never go wanting in a Chaotic Garden. There is always a new one, usually piled on top of other notions, ideas and actual physical objects that have "someday" promises in the gleam of the mind's eye. It began innocently enough, wandering idly and somewhat dispiritedly along the paths, when I noticed that the vintage metal lawn chairs looked as if they could use a sprucing up. Dirty they were, too, and any excuse to fling water around with a hose was a good one. So out came the scrub brushes, the bucket, and a can of car wax, and an hour or so of light labor in the shade later, the "patinaed" finish of chipped paint and rust was softly gleaming. (I wasn't about to paint 14 chairs, I did that once before and it took me a couple of weeks to finish them.) Now I like the weathered look; it goes with the old rock house and my casual garden style. Besides, it's a good excuse not to have to paint them.

And  while I was out there fooling around with the chairs, my eye happened to fall on a low vintage metal garden table that I purchased at a yard sale years ago, painted blue, and made plans for a mosaic top. Rummaging around in the basement among my saved "I can do something with this" treasures, I found a bucket of small black and white ceramic tiles that someone who was remodeling a bathroom had given me. Now I had another "no sweat" project that I could do sitting in the shade on the deck! But I had to have more components, so a trip to the big box home improvement store was in order, for tile cement, grout and sealer.  Three days later, voila! 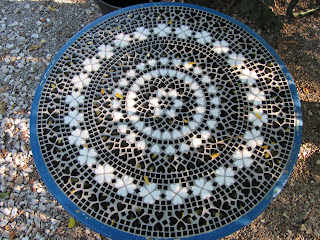 Now I was on a roll. An old birdbath pedestal base, a hexagonal concrete stepping stone left over from another project, more of those tiny black and white tiles, the remains of the grout and sealer, and I had a small matching table for a back patio.

Then what? I had been "gifted" with a stack of used bricks that had to go somewhere (and yes, it was a gift that I gladly accepted, one can never have enough bricks!) For years I had been wanting to pave over a 10' circular patio area that had been in gravel, and now I had enough bricks to do it; so that was next. 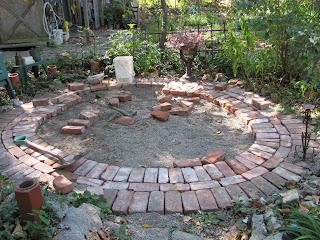 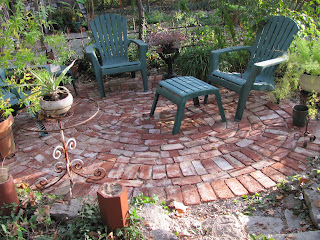 Since I was dealiing with used, cut and broken bricks of odd shapes and sizes, the pattern kind of fell apart at the center and it became a challenging jigsaw puzzle to make them fit.
A half-century old wire fence that went along the propery line at the edge of the woods needed some definition behind the lower pond, and gathered branches tucked into the ancient rusty wire made a rustic barrier next to a gate we made from an old lichen-covered bench back. 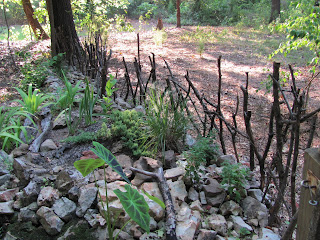 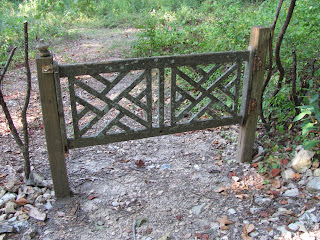 I feel so much warmer now!

Winter, a lingering season, is a time to gather golden moments,
embark upon a sentimental journey, and enjoy every idle hour."- John Boswell