Hi, My Name is Sandy and I'm a Hostamaniac

"There are two seasonal diversions that can ease the bite of any winter.
One is the January thaw. The other is the seed catalogues."
- Hal Borland

I wonder what Mr. Borland would have had to say about the proliferation of catalogs on the internet, which; of course, didn't even exist in his day.  I well remember anticipating the mail with Wayside Gardens, Jung, Henry Field's, Gurney's, Park's, Stark Bro's and a handful of others, all arriving in early January when the winter was the bleakest. I don't recall exactly when they started coming in December before the Christmas tree was even up, I just remember piling them on my desk until after the New Year when I could properly give them the attention they deserved, pouring over the riches of plants in them like a kid in a candy store, making lists, dreaming of spring.
These days, I still get Jung, Gurney's, Stark Bro's, Thompson Morgan and a small handful of the same others, scattered from early December until late January, but sadly, print catalogs seem to be vanishing from the gardener's landscape.

My particular addiction (well, one of them, any way) isn't in those wonderful catalogs that try their best to tempt me with beautiful colors and descriptions of new and startling garden wonders; many of which I don't even recognize these days with the proliferation of  "designer" plants that have been introduced in the last 20 years or so..........how many echinacea cultivars that somehow all look alike do we really need, anyway? 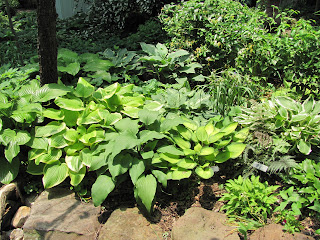 It starts so small, just one little bed
I confess, I  too now turn to the internet for my hosta fix. This year, it started early when  the Naylor Creek hosta list arrived in full color print in my mailbox in November (!!!!) to whet my appetite. These ain't Granny's hostas any more! Not so many years ago, there were 300 or so varieties. Now there are thousands, in plural colors and sizes; golds, greens, blues, streaky ones, multi-colored, changeable and a whole language coined just to describe them. They are from barely 2" tall to monster plants over 9' wide, they grow fast, they grow slowly, they "sport", they are "tissue culture", "originator stock". Individual, unique, newly introduced plants have been known to sell for thousands of dollars in their first year of release. Gardeners collect them like Beanie Babies, showcasing their gardens in hosta conventions,  competing to have the most, the newest, the best, the biggest, the showiest, the most unique, the streakiest, the reddest. Oh yes, red, the race is on to hybridize the first entirely red-leafed hosta! A red hosta may prove to be the blue rose of the hosta world; always just out of reach, but I'm not taking any bets on that. And I want one. The current rage is for the streakiest, most stable leaf. Gorgeous! And of course, I want those too. As my Dear Husband says, I have wantin' ways! 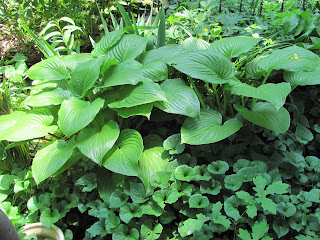 Plantaganea
There are whole gardens devoted to just these plants; dedicated garden forums on the internet; hosta societies all over the world. An encyclopedia of hostas was published last year, the Hostapedia, which costs more than I've ever spent for a book in my life, and is thousands of pages thick (and no, I don't have it. I would rather spend the money on plants...). There are also thousands of plant nurseries on the internet selling hostas, some exclusively, some with "companion plants" a term that just means shade perennials. 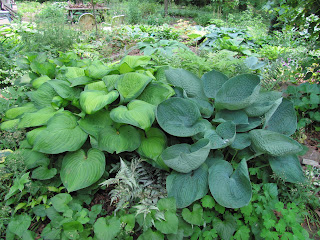 Left, Guacamole:  Right, Abiqua Drinking Gourd
And who can blame gardeners for wanting to grow these wonderful plants? They are the ideal shade tolerant garden plants; mostly easy to grow, pretty much trouble free, tolerant of most soil conditions--one variety will even grow in water; and some like the sun--and hardy as weeds except in the south, where they tend to languish in the heat. Even there, they are adaptable to growing in pots. 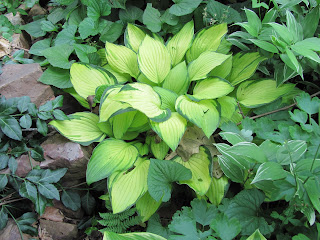 Brenda's Beauty
It starts small.  One catches your eye at the nursery when you're buying perennials. Sure, why not? It would be pretty under the shade tree with the ferns and astilbes. Pretty soon, you have a whole border of them, easy care and beautiful, after all, they don't cost much, $5. or so each,  for all the beauty you add to your garden. Maybe a few more. So you dig up some more of your lawn. You didn't much care for that scraggly grass, anyway and you had to mow it. You could divide up the ones you have, but they are just getting so gorgeous...and you heard about a nursery that had some different ones. Maybe one or two of those. Hah! That's where they get you hooked! Before you know it -and you don't even know how it happened- you've found http://www.hostalibrary.org/ (just looking up one or two to see how they grow, how big it might get--yeah, right, there are thousands of pictures on there to feed your addiction) and oh, look, links on there for a catalog or two! Once you've discovered "designer" hostas, there is no going back. No more $5 hostas either, soon $20 doesn't seem too much to pay for a really pretty one. The "want" list grows expotentially. 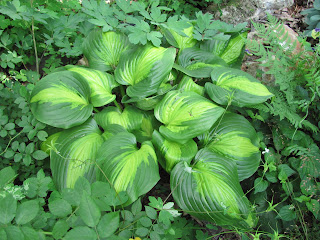 Cathedral Windows
But not me! I can quit anytime......as soon as I finish my hosta orders for spring. I'll quit then! I think. 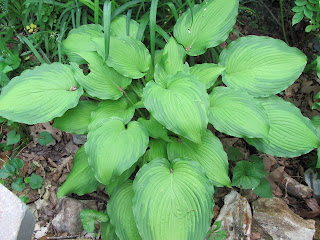 Journey's End
Well, it's been nice chatting, but I have to go now. I need to talk with my group of enablers--oops, I mean, fellow hosta gardeners--over there on http://www.forums.gardenweb.com/. Somebody over there might be talking about a hosta that I don't have!


"A garden makes the most hungry who most it satisfies"
--Anon.
Posted by Isadora at 8:50 AM