Native is the buzzword in gardening these days. We are urged to plant native, even to the extent of digging up our “ornamentals” and replacing them with native plants that “our” insects and birds love.


But the definition of native is often pretty vague. While I do agree with growing locally native species, it is hard to know just what they are. A true native plant is one that grows in the same habitat in which it originated. It can be native to a continent, a state, or a region. So what is that?  Just because a plant was here when settlers first came, does not mean it “originated” here. Seeds are blown on the wind, carried on tides, in rain, or dropped by migrating birds, which is partly why many of our “natives” are also native to half the rest of the world.
“Native” can be one of the most confusing terms out there for the casual gardener.  Is a plant ok to grow because it’s native to the North American continent? Not necessarily, natives to the East Coast could go nutso in a zone 7 or warmer garden and try to completely take over where cold winters don’t keep them in check (ask me about Virginia waterleaf). Or wither and die because the climate is too hot, dry, cold, wrong altitude, etc. It takes a lot of research to determine which plants are actually native and which have been here so long that like humans, they have evolved, adapted and become naturalized. Though some non-natives truly aren’t suitable to native insects and birds many do provide nectar, habitat and food for them. You see as many wasps, flies, bumble bees and honeybees buzzing around a stand of non-native sedums, for example, as around a patch of goldenrod.


Food that our birds can eat? Fruits, seeds, nuts that they are used to? Sure. But remember that many of the birds that live here in summer are not “native”, either. This is their summer breeding ground, and they are only here for a few short months until they return to their Central and South American habitats, where the food they eat is unfamiliar to us.
While many native plants are beautiful, many are not suited for small, suburban gardens. They tend to spread with exuberance, look weedy, and as they should go to seed to keep them going year after year as well as providing forage for birds, also look messy and untidy. To gardeners who like to keep things neat, this might be unacceptable.  If you don’t have a big garden where they can grow in sweeps and swaths, you can still plant natives, but limit planting them to those which don’t spread aggressively. Many native shrubs sucker and make thickets of themselves, and while we all admire sassafrass, shrub dogwoods, native viburnums, sumac and others, most of us don’t want to spend all of our gardening time cutting out the suckers to keep them in check or pulling out  all those seedlings, or give up all of our garden room to them. We need to plant natives with caution, just as we should with imported plants. Some of them should just be enjoyed in their natural setting. 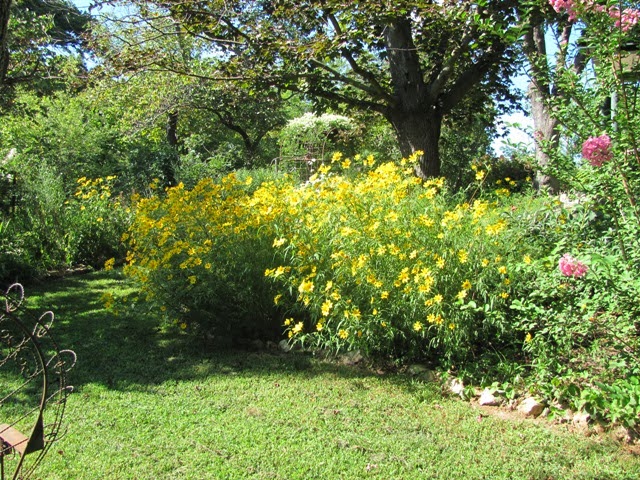 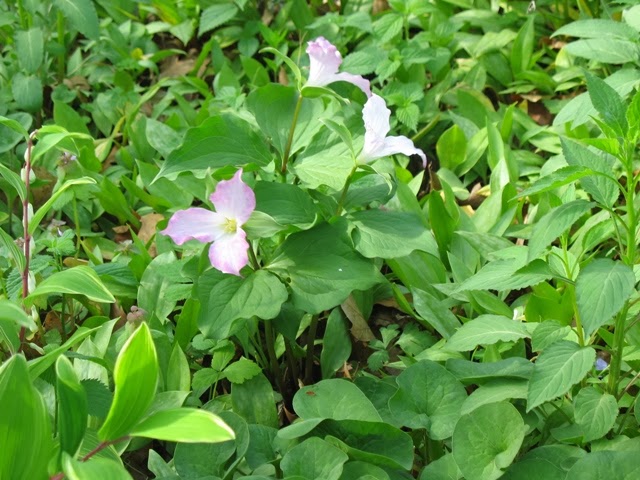 White trillium, a beautiful woodland native to grow. Naturalizes nicely, not invasive.
We grow lots of natives here at Chaos. Some have been mistakes that we are trying (with little success) to eradicate from our garden where they crowd out other less aggressive natives that we really want. Violets are one of the best examples I can think of, though they were here before we were. Beautiful and loved in verse and art, they spread with such exuberance that they quickly become a nuisance weed. In this garden they have even over-run lily of the valley. That aforementioned Virginia waterleaf makes thick mats of tubers that choke out other desirables. I understand it is endangered in some East coast areas. I would be glad to send them all of mine. Mayapples? Solomon’s seal? Native ginger? Cattails, or heaven help us, horsetail fern? I do have horsetail in my garden, but it is in a barrel water garden in a pot where it can’t escape, because it could take over the known world with a good running start. Native to half the world, including the US, it is not a desirable garden plant.
Many natives have hybridized with imported plants over the last few hundred years to the point where it is impossible to separate the taxonomy, and have become an integrated part of the biodiversity of our continent, as impossible to eradicate as the earthworm, which is not native here, either.

In many cases, non-native plants are so heavily into our culture and economics that we could not do without them. Peaches (native to Asia), apples (Kazakhstan), European grapes, oranges (China), cotton (Central America), beets (Mediterranean), tomatoes  and potatoes (South America), soybeans, wheat (Asia, Middle East) and a host of other fruits and vegetables come to us from all over the world to be grown in our  farms and home gardens. Many of the food plants from Central and South American came to North America via early native traders and were already here when early European settlers arrived, so we think of them as native. And, those honeybees! Not a plant, imported from Europe, but who wants to do without them? They are an important part of our economy.  If not for honeybees, what would pollinate all those imported food plants?
So where do we draw the line? Purists would have us grow nothing but natives, but who wants to give up their vegetable gardens? And what about all our native wildflowers that the Europeans “discovered” here, took home and hybridized into myriads of cultivars to sell back to us—are they still considered “native” because they originated here? And I guarantee that I am not giving up my daffodils, crocuses, tulips and hyacinths. I think we can find a balance of native and non-native plants, and our gardens are richer for it, just as our country is rich with a mixture of peoples from other cultures. Diversity is my buzz-word. There is room for a lot of that, taken responsibly and in moderation. 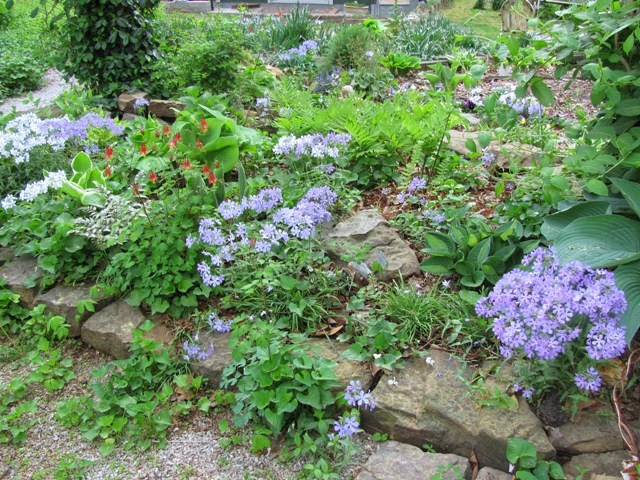 
The point is, we have to use as much common sense planting natives as we do with planting our beloved imports. Many non-natives are not aggressive, such as hostas, and co-exist beautifully in our gardens with no real threat to our environment. I grow mine with native trilliums, mayapples, ginger, dog-tooth violets, ferns, columbines, bloodroot, and a host of other woods wildlings. I do find that growing some natives is a lot more work than my other perennials, just keeping them in check. 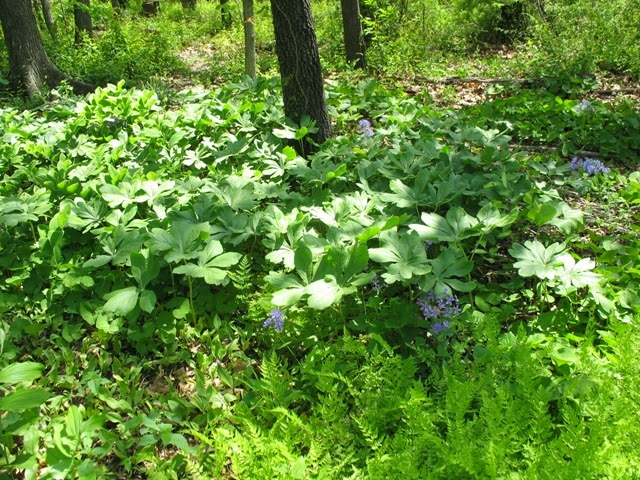 Be sure if you plant natives, you have room for them to spread, because they will, exuberantly.


But for all the exotics I grow, there is also such a huge population of natives that no animal, insect or pollinator goes hungry here and our garden teems with wildlife. It seems to be in pretty good balance as I seldom have a problem with anything except deer and mammals which, because of human population growth, have lost many of their predators. much of their environment and are forced to live in our back yards, but that is another issue.
Get a good book on North American wildflowers, one that is written for your area, make lists, research anything you are thinking about planting, and if anywhere in the plant descriptions are the words “colonizes well”, “spreads easily”,” reseeds well”, or “good for naturalizing” consider whether it is right for your garden, native or not. Look up invasive plant lists to determine if a “native” is invasive in your area. And yes, read Doug Tallamy’s book, “Bringing Nature Home”. It is an eye-opener.


A good source for information is the Chicago Botanic Garden’s research program: http://www.chicagobotanic.org/research/plant_evaluation/.


Others are the Missouri Botanical Garden:  http://www.missouribotanicalgarden.org/plantfinder/plantfindersearch.aspx


And Cornell University has a great site about growing natives: http://www.cornellplantations.org/sites/default/files/Native.plants.Seed_.workshop.pdf
Posted by Isadora at 7:59 PM