After last week’s rant on planting natives, I should make it perfectly clear that I’m all for it, in case anybody takes me to task. I just want to make sure that when I plant them in our own garden, I know what I’m in for.  Just as non-native or Old World plants can become invasive here, so can local natives if they are planted heedlessly. In their natural range, natives are subject to disease, insects, animal predators and grow with other plants that help keep their populations in check. But when a single native variety is planted in a garden and released from the limiting factors that keep it under control, it too can become invasive when provided with fertile soil, plenty of water and room to roam.
That’s a hard lesson I’ve learned as our garden and I get older. One bed must be extensively re-done this spring because it is so infested with native goldenrod, spiderwort, black-eyed susans, blue star grass, and penstemon that other, smaller desirable natives are having a hard time of it. Shooting stars, native sedums, crested irises, and trilliums are being sorely tested. These native invaders have severely crowded non-natives; iris tectorum, lilies, peonies, clematis, creeping thymes, and columbines that I really want there. And they spread seed so wantonly that even with regular deadheading, they shortly get totally out of control. Their deep roots cling tenaciously to this rocky soil, making them really hard to remove, especially after a winter’s growth. They refuse to be pulled, giving up their top leaves like a lizard losing its tail; having to be dug out, disrupting desirables along the way. Inevitably they insinuate themselves into crowns of other plants, replacing them quickly if they aren’t dealt with. I must admit responsibility for some of them, but I blame birds and wind for the rest.


Not to say that they shouldn’t be planted in a garden. Those aggressive natives are beautiful with echinaceas, monardas, daisies, grasses, phlox and others that can compete well in thoughtfully planned beds.
I love them anyway as a mother loves her incorrigible child, but this year they are all going to be banished to a meadow area where they can merrily reseed and I don’t have to deal with them. It’s way too much work. My goal is to make Chaos less labor intensive as we grow older.  I just want to walk down the paths, tell the flowers how beautiful they are, piddle with them a bit, plant some new things once in a while, watch the birds and butterflies; you know, the fun stuff. I have been mostly successful with some areas, and still tinkering with the rest. 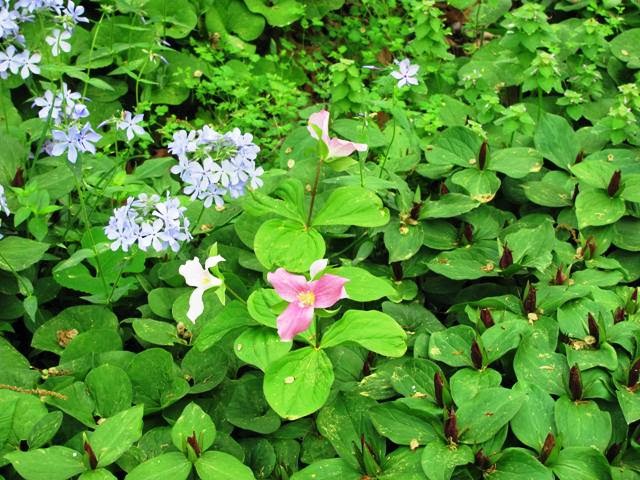 I wish some natives were a little more aggressive, especially out in the woods where I keep dividing and transplanting them so they will carpet the ground under the trees with our hostas, hellebores, heucheras, and other shade perennials. Many wild woods plants are spring bloomers; ephemerals that come up early, put on a show, and then disappear until next year. Trout lilies, Mayapples, Dutchman’s breeches, gingers, Virginia bluebells, hepaticas, ferns, false Solomon’s seal, Jacob’s ladder, violets in every color, bloodroot, false rue anemone, and Jack-in-the pulpit grow out here with woodland phlox, a little annual yellow corydalis, that cursed Virginia waterleaf—I don’t divide or transplant that one however—, and too many others to name, all keeping company with thousands of daffodils, crocuses, grape hyacinths, scillas, pushkinias and azaleas that turn the woods into a blaze of color. This garden is a place to visit to see spring in all its glory.
Virginia Bluebells 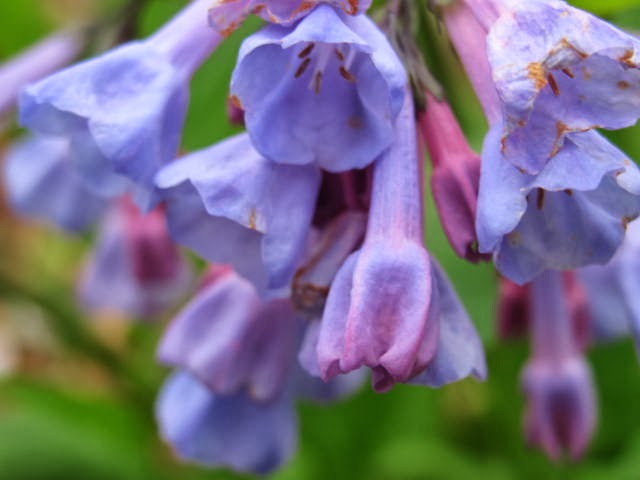 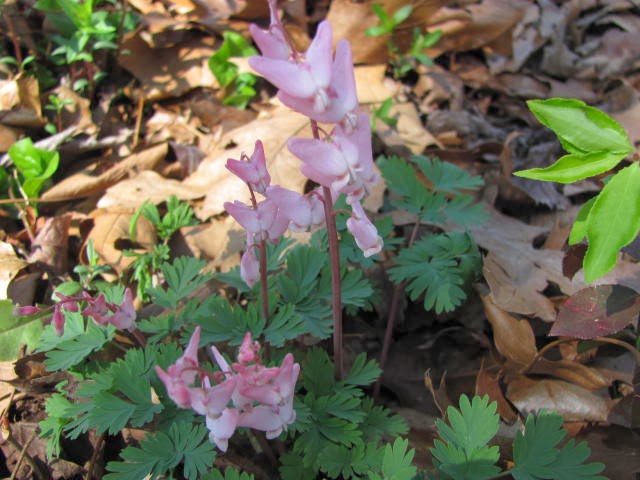 By the end of May, though, most of them are gone and only a green carpet of gingers, Solomon’s seal and ferns remains with the hostas and their perennial companions. Other mostly well-behaved natives and non-natives such as creeping veronicas, golden moneywort, tiarellas, leadwort and succulents take their places for the summer.
I add more spring-blooming natives as I find them. Last year it was trailing arbutus (epigaea repens), loved from the Michigan woods of my childhood. An endangered native of the east coast, it is a low-growing member of the heath family, pink-flowered and sweetly scented. Acidic, humusy soil in an oak forest is its natural environment so it was placed at the foot of a white oak where it lived through last season, though this is probably a bit far west for its range. My hopes are high for it, so three more were ordered this spring, along with pink shooting stars (dodecathion) to join existing clumps of white ones. 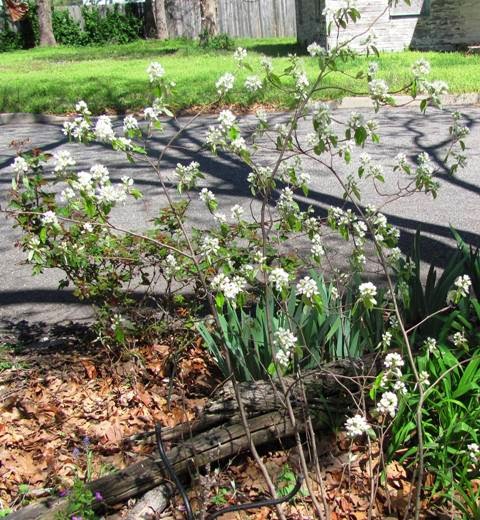 Early-blooming native serviceberries have been planted under tall hickories along the south edge of the woods. The fruit is tasty in pies and jam, but I doubt we will get any of the fruits to eat as robins love them better. They are all sprouts from a serviceberry that I once planted closer to the house, not taking into account its suckering ways. Now, those suckers must be dug out each spring to keep them from crowding out a hydrangea that is its bed-mate, and making a serviceberry grove out of the whole area. If I was a harsher mistress of the garden I would pull it out, but I love its delicate white flowers and watching robins plunder the berries in summer.
Planting anything just because the tag says “native” without researching it can cause serious trouble in a small garden. Like with any plant, native or otherwise, find out its habits beforehand to use the right natives for a situation. Plant for wildlife but remember, gardens are for people, too. It’s not fun if the plants make you work too hard.


Many native plants can be found at local nurseries. Missouri Wildflower Nursery will be at area sites this spring including our own Wildcat Glades with plants to sell. Their catalog and schedule is at http://www.mowildflowers.net/


Published in the Joplin Globe, "Speaking of Gardens" by Sandy Parrill   March 9, 2014