How Does Your Garden Grow?

What a winter we’ve had in the Ozarks, zone 5 cold in our newly designated zone 7. Some plants that survived the past ten winters with no problem may have had a hard time of it this year. Chilly March weather kept us from working in the garden to do our normal spring clean-up and we’re still way behind in April with more cold windy days, so we haven’t yet fully assessed damage. It appears minimal, so far, except for branches broken in the last ice storm.

Most perennials and wildflowers seem to have thrived through the winter, possibly because we had a good snow cover that protected them when temps dropped to below zero; giving them plenty of slow soaking moisture as it melted. A few have heaved themselves partly out of the ground, and need to be replanted or their exposed roots covered with soil. Patches of native hepaticas, trilliums, Dutchman’s breeches and other woods denizens are thicker than ever. Hostas are vigorously thrusting through a thick layer of leaves we haven’t yet touched, except to pick off the dead leaf “caps” that they pushed up as they emerged. 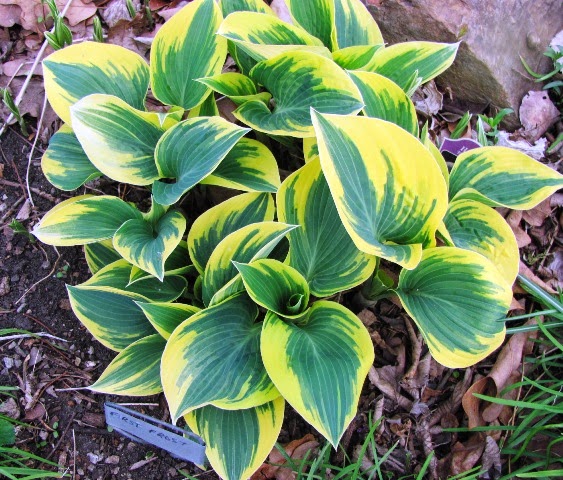 Hosta Montana Aureomarginata
We’ve cut back last year’s ratty hellebore leaves to let the flowers show off. Two year old seedlings that are now big enough to bloom are showing amazing color variations from their parents. I’m really excited about a whole new group of babies that have come up between double-flowered “Golden Lotus” and single “Painted Strain”. If they have cross-pollinated, we might see some really interesting flowers in a couple of years. 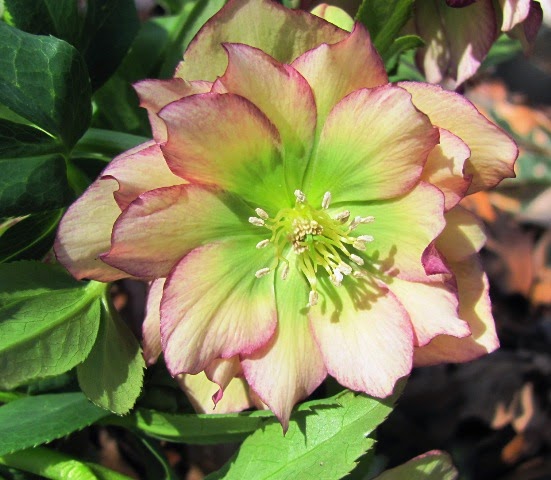 Some plants we weren’t sure would make it have surprised us; the Pink Dawn viburnum that started to bloom in January with its sweet scent put itself on hold when that “polar vortex” hit; now the flowers have reopened, making us exclaim “what IS that smell?” when we go outdoors. Nandina domesticas look pretty sad, but being a Southern plant, they are only semi-evergreen here anyway. They will probably leaf out again so I’ll hold off with the pruners until I actually see dead wood.
Mahonias have lost their flowers; the fall-set buds dry and crumbling, disappointing the many bees that usually visit in early spring. We won’t know about pruning blue and pink hydrangeas until they leaf out, as most of them bloom on new wood, but white Annabelles and oak leafs are fine. The tree peonies I’ve been holding my breath over are finally budding out this week.
We have resisted planting loropetalums, cold hardy camelias or any of the other borderline zones 7-8 plants that have been available in regional big box garden centers for the past few years, so we don’t know how any of them fared. Not well, I am thinking, though the US National Arboretum states the camelias are hardy to zone 6b. A friend who planted some tells me she lost all of hers. Missouri Botanical Gardens Plant Finder says loropetalum will take temperatures into the lower teens with root mulch protection. I am curious to know if any at all survived last winter’s test.


Time will tell about crape myrtles, butterfly bushes and vitex. They don’t leaf out until May, so I’m not going to prune any of them until we see what died back. We cut back one crape myrtle a few years ago after a hard winter; as it turned out none of them were damaged and it wasn’t necessary. It’s not a mistake we plan to repeat. “Crape murder”, the practice of cutting them back to ugly stubs in spring, is not a crime I care to commit.
I am a bit worried about our zone 7 Himalayan evergreen dogwood, cornus capitata. It wasn’t evergreen this year, but the branches still seem supple and green. It will extend dogwood blooming season into May, provided it lives after surviving drought, browsing deer, and now deep cold.


Japanese maples are all leafing out and look just fine; just a few dead twigs.  Winter-burned boxwoods, hollies and euonymous should be clipped back to new growth, maybe even replaced if they are too badly damaged.
It’s a good year for our tulip magnolia. Hard freezes get the blooms about three out of five years, but we got to enjoy it for once. The petals are falling now, turning the ground and deck into a pretty pink and white carpet. 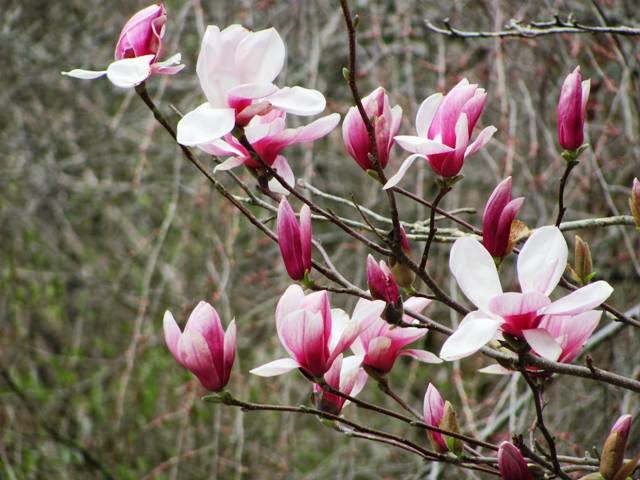 Azaleas are questionable. Some of them look iffy, having lost nearly all their leaves, but azaleas are tough. A few we planted down in the woods were only labeled hardy to 10 degrees. They may be done for, but I’ll wait and see before I pull them out. Old ones on the north side of the house are undamaged.
Some roses suffered the winter badly and must be severely pruned. We don’t grow hybrid teas, but I have seen them in other gardens with a lot of dead, black canes. Those should be cut back into live, green wood with outward facing buds. Our hardy Knock-Outs are fine. We prune ours back hard; they seem to grow and bloom better if cut back to about a foot above the ground.

A friend tells us this was the coldest winter on record in 12 years.  It certainly seems the longest; it came early, partied hard and stayed late, wearing out its welcome a month or so ago.  We should have learned the lesson it taught about zone pushing, but gardeners never do, at least for long. We’ll soon forget and be back at our old adventurous gambling ways, trying out new plants regardless of hardiness ratings. As plantsman Tony Avent was quoted saying, “I consider every plant hardy until I have killed it myself, at least three times.” We always have great expectations for a wonderful Spring.