Keeping the natives under control 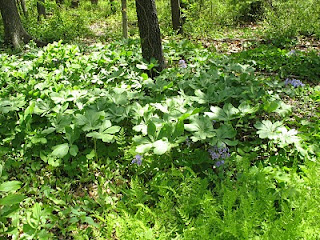 As much as I do love the native plants, I have learned over the last 25 years that all things must be kept in moderation. After spending all yesterday ripping out a huge patch of Virginia waterleaf (hydrophyllum virginianum) that had gotten totally out of hand--and by no means did I get it all, there are still great drifts of it--(that stuff is endangered in some areas? Really?) it was once again brought home to me that messing with Mother Nature is not to be undertaken lightly, or you may regret what you have wrought. I planted a couple of those plants in my woods about 20 years ago, and for years, it grew to be a nice, flourishing, pretty little patch, lovely spring blooms that the bees love. And then, little by little, it began creeping, then leaping. First thing I know, it's invading the ferns, shoving in among the hellebores, pushing aside the Jacob's ladder, popping up in the middle of the hostas, choking the lilies to death and swarming across the paths and making itself at home in the perennial beds. Besides being rhizatomas, making huge, solid, impenetrable mats that take a mattock to pry loose, it spreads by seeds so no telling where it will turn up. At least 50 feet away from the original patch. I moved a lot of it down to the bottom of the woods where it can spread to it's heart's content without making it's neighbors miserable and I will be working diligently to get it out of all the other areas where it has settled down. I do love it, but enough already! 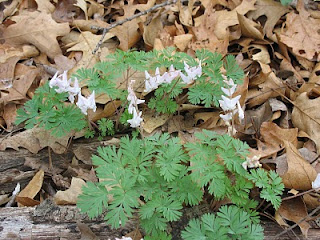 That said, and while we are on the subject of  planting native, which I fully endorse, a little common sense and observation of nature is in order before you begin. If you see huge drifts of say, Queen Anne's lace along the road, or sweeps of black-eyed susans in a field, that will give you a clue of how they behave when they get established. I have them both in my garden, and usually I try to dead-head them before they go to ripen, leaving only a few to reseed. Some plants can reseed all they want without causing a real problem, like the columbines, of which I don't think there are ever enough, and woodland phlox, which is easily moved if it spreads too far. Spring ephimerals, like trout lilies, trilliums, Virginia bluebells, bloodroot, and hepatica, which belong in a shady woods setting anyway, where they won't be disturbed, can spread all they want without causing a problem. Mayapples, violets, certain ferns, and solomon's seal, beautiful as they are, should not be turned loose in a garden border unless that is all you want to have in a few years time. Native plants are like wild animals; beautiful, sometimes elusive, and we all want them for pets, but they can be terrible and not at all able to be domesticated!  There are many wonderful cultivars of  wild plants which ahave been bred to make good garden plants, and if you want a reasonably tidy garden, those are probably the ones you should seek out. If going totally native is what you're interested in, then neatness in a garden is probably not your style.  Growing native can be a lot of work!
You should also be careful what "native" plants you go for. Learn what is considered a noxious weed in your state, such as Canada and Scotch thistle, some varieties (or all) of lythrum, kudzu, multiflora rose, among others, and also know that they are NOT native plants, but like Japanese honeysuckle, have been imported and are vicious invasive marauders, and in some cases, it is illegal to grow them. Also, some true natives are considered rare and endangered (like the Virginia waterleaf) in some states and may grow prolifically in others.

Knowing your zone is also important. There is probably no way to grow ferns from the Pacific Northwest, in Missouri (ask me, I have tried), or desert sage in North Carolina. What you should look for are plants that are native to the area in which you live. Not only will they look natural in your setting, you will not be introducing a species that might go hog wild and try global domination in your good soil conditions that they wouldn't get where they normally grow. Or, just die because you don't have cool nights, or hot enough days, warm enough winters, too warm winters, or the elevation is wrong.
You will find that there is a lot of overlap between zones, and many wildflowers and lovely natives that grow in Minnesota or Canada will grow as far south as zone 7, possibly 8.

But regardless of their zone, you probably cannot grow saltwater beach plants in the Ozarks, or freshwater swamp plants on the oceanfront. You need to give them the kind of soil and growing conditions they have in the wild, in order to be successful. But always take with a grain of salt what the books tell you; e.g. those Virginia bluebells? Books say they need moist, cool woodland soil. In my Ozarks plateau woods, they are happily making well-established colonies in rocky, dry soil in our hot summers, reseeding themselves in the gravel paths, between stepping stones, and in odd corners everywhere. They do go dormant in the summer, their beautiful blue bells only a brief spring show, so they never get to be a nuisance. Others, needing a lot of shade in the wild, may grow very well (too well) in part sun if they have extra moisture. 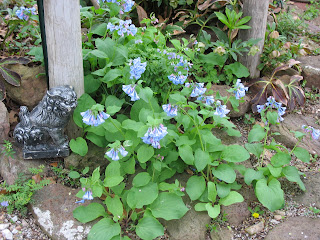 You just can't have them all, nor would you want them in a lot of instances. So do your research, choose wisely, grow native, and enjoy!
Posted by Isadora at 1:35 PM