Where have all the old ones gone? 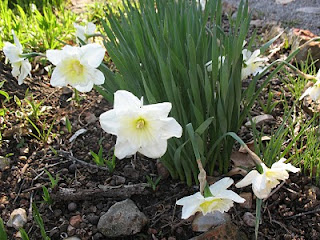 In my Garden of Books, where I spend a lot of time when bad weather prevents me from being outdoors, I have several garden books written 75-100 years ago. I love reading about plants of days gone by, heirloom varieties that seem to have simply vanished, and I wonder if many of them are still around? There are some vendors who specialize in "antique" plants, but many of the sames I see are not on their lists. The white daffodils for example, were the rage in the l930's. Names such as Alice Knights, Beersheba, Driven Snow, Eskimo, Everest, La Vestale,  Trappist, White Emperor, White Knight, Lovenest, Silver Glory, Eve, and among the Triandus hybrids, out of Agnes Harvey, Moonshine, and Thalia, only the latter seems to be still in commerce.  There were doubles: Albus plenus odoratus, Mary Copeland, the Pearl, and Snowsprite. There are many old varieties in my garden, which was old when I moved here, and I don't know their names, but they are beautiful nonetheless.

There were Houstonias (bluets, or Quaker ladies,) , those tiny blue stars that make you bend down to see them, in several varieties, most of which, I expect, have just been allowed to go back to being wildflowers, and we will have to hunt them out again if we want them in our gardens. I think I will, and plant them as a ground cover for some of the spring bulbs, as Henry Dupont did in his famous gardens.

And oh, the old roses! These days we have the new continous blooming, no-labor varieties such as the Knockouts, because of course nobody wants a bush that only blooms once a year (huh, what about azaleas, and dogwoods, and forsythia......). What of the old ones, the musk roses, the rugosas, the old moss roses? I love the names: Madame Plantier, Coquettes des Blanches, Glorie Dijon, Marechal Neil, Baltimore Belle, Harrison's Yelow, Jaqueminot, Camile de Rohan. Thankfully rose societies have saved as many of them as they can. I much prefer them to the fat, spoiled, scentless hybrid teas and shrub roses that have wonderful flowers, but when you bury your nose in them, there is nothing.....no soul. I would rather have a wild multiplier rose that needs to be handled with a heavy hand like a rowdy child, pruned and hacked back to within an inch of it's life in order to keep it from taking over my world, but that perfumes the air for yards around with it's delicate white blooms.

With the current explosion of new varieties in heucheras, echinaceas, irises, hostas, hemerocallis and others, I sometimes wonder if  75 years hence gardeners will be asking, "Where do you suppose those old varieties went, that were here at the turn of the century?"
Posted by Isadora at 1:20 PM