Pink Bloodroot and Nature in Chaos

When you have mossy paths in the woods, you can't rake them to get the leaves off, they have to be taken off by hand. That means you have to get down there and look the little spring flowers right in the eye, and see what they are up to. Which is how I found the pink bloodroot. There it was, right next to the dry creek, this little pink bud. At first I thought oh, a pink anemone, cool! A second look told me my mistake, and I couldn't believe what I was seeing! Last spring, I transplanted a few bloodroots to a new area, and I am pretty sure they were all white, but when I went back to look at the blooms this spring, where the original clump was, lo and behold! There was one with alternating silvery pink petals! Can't wait until tomorrow to see if the little pink bud opens up all pink, or with alternate petals also. The pink color variation is a rare occurance. This is the first time in my life I have ever seen it. 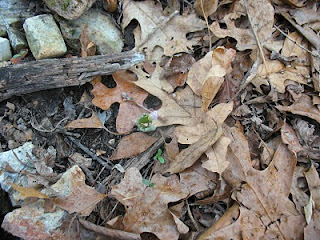 The pink is a little hard to see, but my camera has decided not to work on macro, so this is all I got! 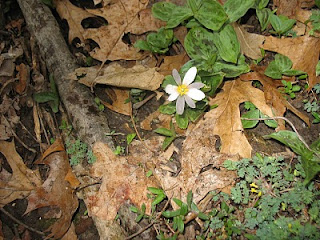 Four out of the eight petals on this bloodroot flower are silvery pink!
The funny thing was, I had been thinking about chaos, nature, evolution, plant DNA, what drives genetic change, just moments before, and there was the result, right before my eyes. Chaos is something most of us never think about, unless it happens to us, and then we just think of it as something terrible and upsetting.  Actually it is a "new" science, only recently recognized and studied. I don't even pretend to understand the higher mathematics of chaos, but it is a fascinating concept that includes fractals, which I love, and wouldn't be possible to calculate fully with without computers!. I can easily see how chaos drives Nature, or maybe it is Nature that drives chaos, or chaos that drives evolution, that drives Nature....or......the old question of what comes first!
It involves a linear equation, such as the life of a plant: the seed sprouts, grows, flowers, sets seed, which sprouts and begins a new plant, and so on. Without error, this cycle could go on indefinitely in all the complexity that it takes to grow a plant to reproductive success, amd there would be no diversity.  But there is always an "error", no matter how slight, something unseen or unexpected that will disrupt the cycle. The plant dies from lack of rain, no bee is present to pollinate the flower, a deer eats the plant, a bird eats the seed. This is called a non-linear event, and chaos results. But the result of chaos is not tragic, it just triggers a change, into another linear cycle, until another non-linear event comes along to cause chaos again. A tree grows, year after year, a linear cycle. Then chaos: a storm fells the tree. The end? Only for the tree, the cycle of decay begins, and new life is nurtured with millions of chaotic events before the tree is gone, and even then, the process never stops. The chaos concept involves everything in the universe.

No action can take place without causing change to something, and in order for change to take place, there has to be a chaotic non-linear event, so matter how infinitesimally small, to cause it. All sorts of things, big and little, can cause chaos that changes the environmment in some way. A big one that comes to mind is Hurricane Katrina. One change that came about because of the chaos caused by that storm affected the bird population of the midwest: immediately after the storm, fish crows began showing up in Missouri. They are a seacoast species, and were apparently either blown north by the hurricane, or escaping from the storm. They apparently liked it here, because they have decided to stay, throwing our native crow population into chaos by competing for food and habitat, thereby changing the ecology of our area.

So what caused the bloodroot to become pink? Some unknown non-linear event in the life of the plant, no doubt, throwing its DNA into chaos and causing a diversion in its genetic makeup. This sort of thing occurs in nature millions of times in a day, resulting in slow evolution of all species, including humans! (need evidence? Look at the changes the enviroment has caused in our physical bodies!) Plant hybridizers have learned to harness and use this type of event, giving us those wonderful new cultivars that we all covet.

Without Chaos, we would have no wonderful diversity of Nature. But without the actions of Nature, we would have no chaos. It is the Circle of Life, the Web of fragile threads to which everything is connected. Whatever happens to the Web effects everything in it. It drives climate change, our health, our daily lives, and the universe as a whole.  Our own actions cause chaos every day. In my woods today, it was me--cleaning up leaves, throwing millions of little microbial creatures' lives out of whack, uncovering plants and exposing them to sun and rain, changing my own environment ever so slightly. But those ever so-slight changes are non-linear events that could, over time, change the ecology of the woods. All gardening and farming efforts, for better or worse, cause chaos and change, as we can plainly see, looking at what has happened to the forests and prairies in the United States and the populations of many indiginous species, both plant and animal. Sometimes one chaotic event can set in motion changes that take many years to become evident; sometimes it happens in less than the blink of an eye.

Pretty deep musings for a day spent in the outdoors, huh. But it really made me aware of the amazing, complex life on this planet that we take for granted every day, and what cause and effect our (my, your) actions have on that life. Our very lives are as a result of Nature, and we depend on her for our lives. Nature is our nurturing Mother. So..... mind your Mother. 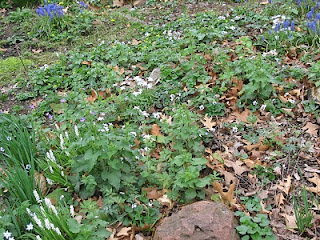