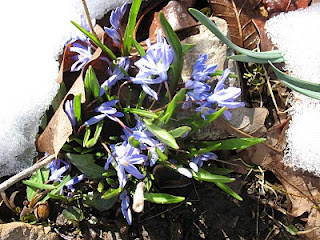 The snow has mostly retreated from all the open spaces, but on the north side of the house and the stone wall, there are still drifts in spite of the 70 degree temperatures today. By tomorrow, there will be no sign left that the world was covered with a foot of snow just 3 days ago. It actually was good for the garden; since it has begun to warm up and the moisture has seeped into the earth, flowers have bloomed in just a few hours time. Weeping cherries, magnolias, redbuds and lilacs are all showing us a tease of their spring dresses. Forsythia and flowering quince couldn't wait, they have burst into full flower since this morning. Shade trees are lacy with buds, and the woods has a feeling of eager anticipation. 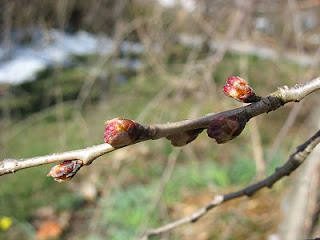 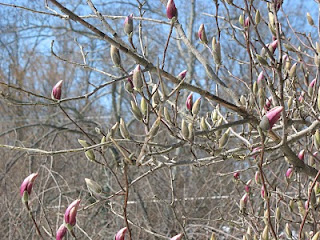 Magnolia soulangeana
As the snow melts, I am seeing things that I have never before noticed. Not long ago, my attention was caught by a photo of, I think, bluebells planted in a river in the woods, and I wanted that effect. Not having access to all those thousands of bluebells, I thought to plant a stream of grape hyacinths, which do grow in my garden, literally by the thousands! Transplanting some wouldn't make much of a dent in the 60 year-old swaths of grape hyacinths under the forsythia, so I started it last fall, trying to follow a natural path in the woods, but I couldn't quite see where it should go. Not to mention that it was difficult to find the bulbs when they weren't up. Watching the snow melt this spring, I saw the pattern through the trees, exactly where to follow the lay of the slope. Grape hyacinths are easily transplanted in the spring, even in full bloom, so I am going to work on that in the next couple of warm days. It may take two or three years to get the full effect, but I have patience. 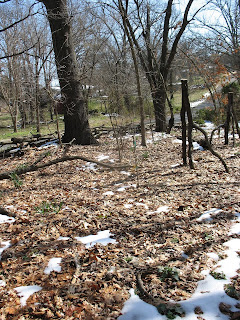 Follow the snow trail to the left,and imagine this to be a river of blue blooms! Flowing around the
young Kousa dogwood in the center of the picture, and down the slope to the bottom of the hill.
Other patterns begin to emerge; when the ground is somewhat bare of foliage it is easy to see where new beds should go, where curves could be made more pleasing to the eye, and in my mind's eye, where plants would give the best effect if I moved them around a bit. Some of my plants spend more time on the end of a shovel than they do in the ground, I think. I have planned a big new hosta and shade bed, where the Virginia waterleaf was removed last week. It has all been nicely dug and prepared with a thick layer of compost, and I spent most of the afternoon planning where the new plants should go, sticking labels in the soil to mark the spots and planting the bare root ones I have already. It is bordered on one side with a mossy path, and on the other with a huge patch of giant Solomon's seal. The whole thing is shaded with a black walnut, and I have left a 2 yr old redbud as an understory tree in the future. I have also left surprise lilies (lycoris) and a few purple violets.

On the other side of the tree are Jacob's ladder, ferns, wild sweet William (phlox divaricata), a hellebore, a "Paul's Glory" hosta, and here I have spared a few of the Virginia waterleaf. (I may be sorry later!) It is edged with crested irises, ajuga, yellow wild violets and strawberry begonia (saxifraga stolonifera). There are also daffodils scattered about the whole area, and trout lilies transplanted from the lower part of the woods.Stepping stones and a birdbath separate this area from a whitebud (cercis canadensis alba) surrounded by honesty, more daffodils and other spring blooming bulbs, and a colony of Virginia bluebells. This whole area is all part of more extensive plantings that lead down the hill into the woods itself, getting more naturalistic as it goes deeper among the trees where the truly wild things live.
I've left plenty of room for the plants I've ordered, but they won't be here until late April or May, which somewhat distresses me. It usually gets pretty hot here in the Ozarks by mid May, and most perennials should already be in the ground and growing by then, but no one will ship this early to my zone. By mid May, most of the spring bloomers have come and gone. There seems to be a "window" of planting for spring wildflower perennials here, about 3 weeks between mid-March and mid-April, and if it is missed, sometimes they have a difficult time getting established.

Tomorrow I will also be transplanting wild ginger, woodsia ferns, Virginia bluebell babies, hellebore seedlings, trilliums, wild phlox and Jacob's ladder into areas that we've cleared of Japanese honeysuckle and wintercreeper euonymous. I've been doing that for the last couple of years, and they are carpeting the woods floor nicely. 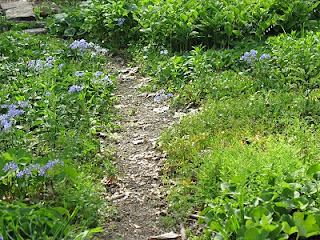 April, 2009
I also have elderberries, which arrived in the mail the day before the snowstorm, and blueberries to plant in the sunny edges of the trees. We probably won't get any fruit from anything. The birds and animals snap up all the gooseberries and serviceberries that grow here, but at least I will have the flowers. I planted an apple tree for the same reason--because I love the flowers! I expect I'll have to cage them until they get established to protect them from the deer. We planted a row of serviceberries along the edge of the woods last fall, and every one is leafing out this spring. They were suckers from a established bush closer to the house.
Part of my day was spent checking out the nurseries and garden centers in the area, and tho a couple of them don't have any new spring plants in yet, I didn't come home empty handed! I've been lusting after Invincibelle Spirit hydrangea, the pink Annabelle that is being promoted to help fund breast cancer research;  http://invincibellespirit.net/ and I bought one today! Not only does it promise to be beautiful, money raised from the sale of it will help this critical research. This is a cause very close to my heart as I have lost good friends in recent years from breast cancer and several other friends are survivors. If you have room in your garden, please consider Invincibelle Spirit.
I also picked up a wintergreen, gaultheria procumbens; a good woodsy groundcover, and another hydrangea, mycrophylla "Pia", which only gets about 18" tall with pink blooms. It should be pretty in the new hosta bed.
More planting tomorrow! 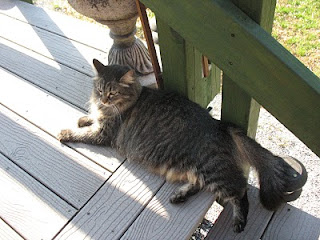 Grendel, soaking up some sun!
Posted by Isadora at 12:35 AM