The first time I saw a bald eagle up close in the wild was at Roaring River State Park, while we were trout fishing. It was so awesome that I nearly cried, then laughed so hard I almost dropped my fishing rod when I realized what going on. The eagle was flying low, maybe 50' away and below treetop level as it chased a flock of crows up the river, flew back the way it had come; circled and made a second pass to be sure those miscreants were staying gone before coming back down-river to perch in the top of a nearby tree where it could keep an eye on its territory and those pestiferous
mischief makers. It was a thrilling sight that is printed on my memory for as long as I live, and a tale I retell at every opportunity to whomever will listen.

This year we went to Stella, Missouri for the first time to see the bald eagles where they have come in for the winter. Stella is at an intersection of four watersheds of Indian and Shoal creeks, and Big Sugar and Elk rivers, a place formerly known as The Village of Springs.  Bald eagles congregate here and in nearby areas in Newton and McDonald counties here in southwest Missouri for food and fishing, December through February. Next weekend, January 25, is the annual Missouri Department of Conservation's Eagle Days in Stella, but the weather is forecasted to turn cold again with another "polar vortex", and it was a beautiful day with temperatures in the 60's, so we opted to miss the festivities and just go for the birds. We were not disappointed! As we neared the Stella area, we saw several eagles soaring high, but the first one we encountered in a tree was not close to the wintering area--it was near a turkey farm. According to a local person with whom we spoke at a convenience store where we stopped for refreshments,  if we wanted to see bald eagles, we should go to a turkey farm with a compost pile--eagles are definitely opportunistic feeders!

There were too many eagles to count perched high in the trees and soaring overhead at a location just outside of the little town of Stella--population 161. The word is that in the winter, eagles outnumber the locals. They are reputed to be fairly solitary birds, as Ross Perot said: "Eagles don't flock, you have to find them one at a time."; but giving the lie to that quote, here there would be several to a single tree, and even two or more to a branch. We could hear them occasionally squawking to each other, like gossipy crows; or possibly a "shove over, mate" complaint about the lack of elbow room. Eagles are definitely birds of attitude! 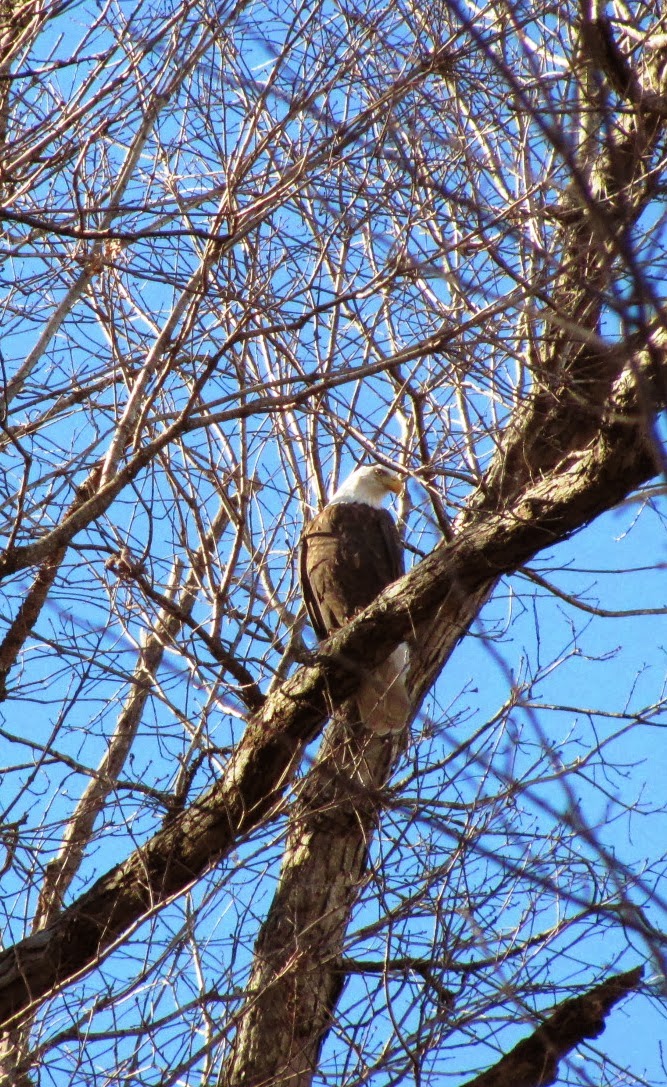 Not for the first time I wished for a better camera. Mine isn't fast enough to catch them in flight, but still, they sat quite patiently in the trees as if waiting for me to finish taking their pictures.

We had heard that they were also at our favorite trout fishing area at Roaring River, about half an hour further south, so off we went again. On this mild mid-winter day, several avid fishermen were
fly fishing in the river where it flows through the park. You can't keep anything you catch inside
the park at this time of the year, but lots of folks like to catch-and-release. There is a hatchery here, with huge open tanks of rainbow trout in all sizes that will be released into the river during fishing season on a daily basis. For now they are just growing and getting bigger while waiting for opening day on March 1.

And yes, there were eagles. Mostly hanging around the hatchery area.....wonder what they were waiting for? 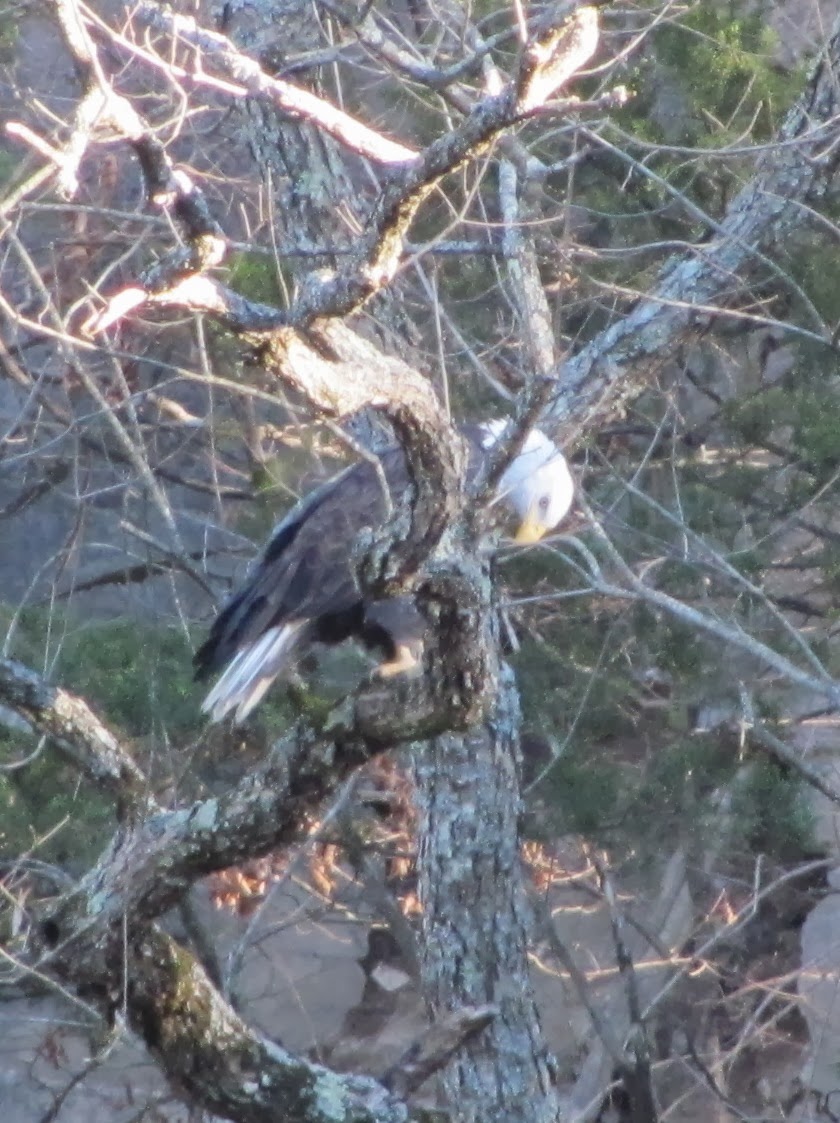 This magnificent bird posed for us for about ten minutes before it finally flew away, watching us as intently as we were watching it.. We speculated that it might be one of the resident population rather than a winter visitor. It seemed to be keeping an eye on the hatchery tanks also. 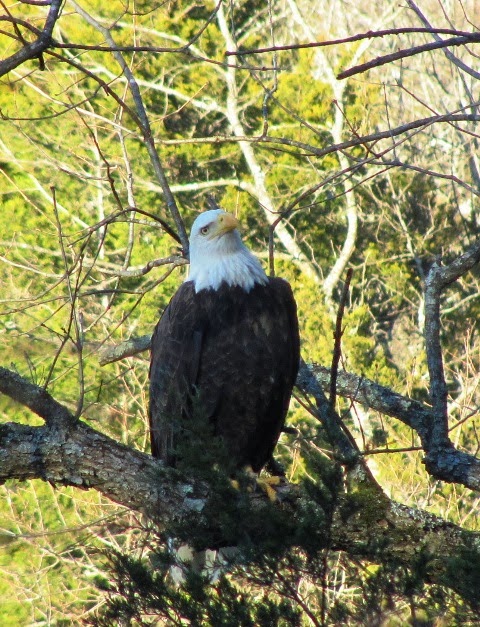 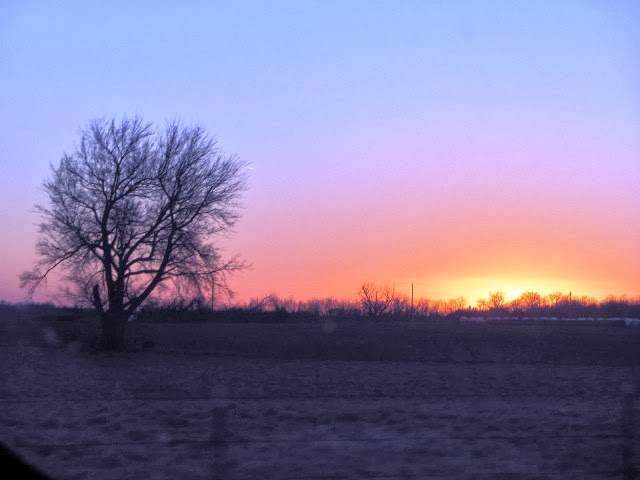 It was a most wonderful day.


"I am the eagle, I live in high country, in rocky cathedrals that reach to the sky."  --John Denver

"May the wind under your wings bear you where the sun sails and the moon walks." --Gandolf the Grey, "The Hobbit"--J.R.R. Tolkien