What is a Garden Without a Cat?

I miss my cat. If you have followed this journal, you may have met my Abyssinian garden friend, Ras TiFari. He was someone special, this companion of mine. Unfortunately, we lost him this year to intestinal lymphoma at only 6 and 1/2 years old. He was a great cat, one of the best, loving the outdoors. The garden was his playground, and he was an intrepid vole hunter, sometimes laying them at my feet, often just bringing them indoors to exchange for a treat, which he always got. He lavished love, head-butts and affection unconditionally to his beloved family, though strangers were a different story and he usually made himself scarce until they were gone. 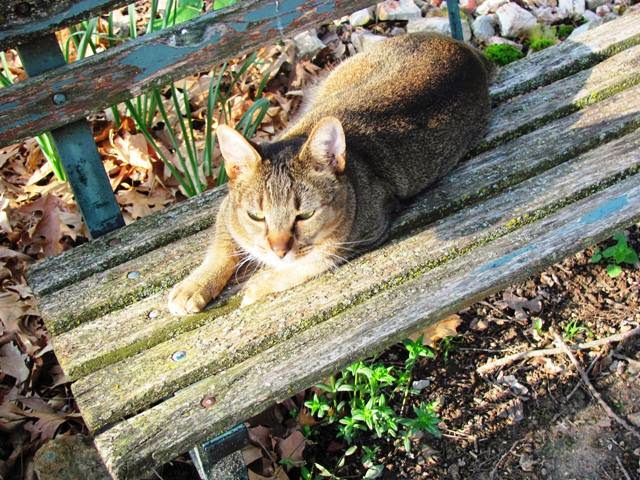 RasTiFari came into this house on my birthday as an adorable, green eyed kitten whose ears were way to big for him; independent with a spirit of adventure that would not be denied. His main goal was to get out that door and see what it was all about out there,. It was all we could do to keep him inside until he got a little bigger and learned where he lived! 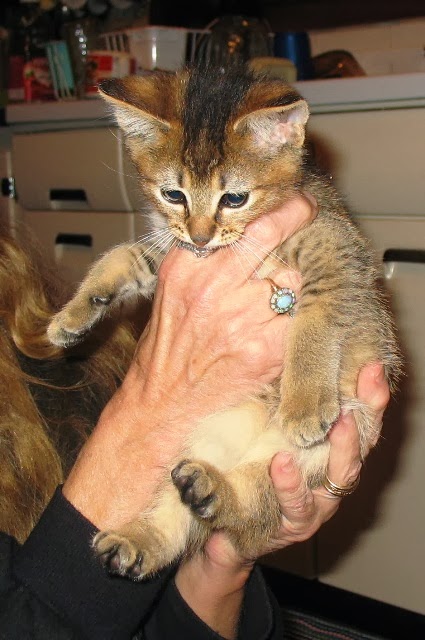 He charmed us all and soon wormed his way into the affections of Cutie, a 3-year old tortoise-shell that had belonged to my mom-in-law and was living with us temporarily. She adopted him as her own. Our Maine Coon, Grendel, affectionately known as Slasher (for good reason, but she came to us declawed and could do no real damage when she swiped at our ankles), not so much, due to her irritable and jealous nature. But she eventually came to accept him as her personal companion after he grew up, following him everywhere, albeit at a discrete distance, keeping an eye on him at all times as he loved to jump her from behind and roll her over--a game in which she participated with great glee whenever the tables could be reversed. She spent a lot of time trying to sneak up on him, and it wasn't easy!

Ras TiFari--being an Abyssinian, he was named for Emperor Haile Selassie, of Ethiopia; formerly Abyssinia--was a intrepid explorer. He loved to ride in the car, as there was sure to be an adventure at the end of the ride, and went with us in our Airstream trailer on more than one occasion to the river campground where he got to go for swims. He was a real water cat. On his last day, before we took him to the vet for the last time, it was raining, and though he could barely walk, he insisted in going outdoors to make his rounds, to check on his beloved garden one last time. He went in the car wrapped in a towel, soaking wet but contented, I think.

Stupid cancer. It took him way too young, and we shall miss him always. 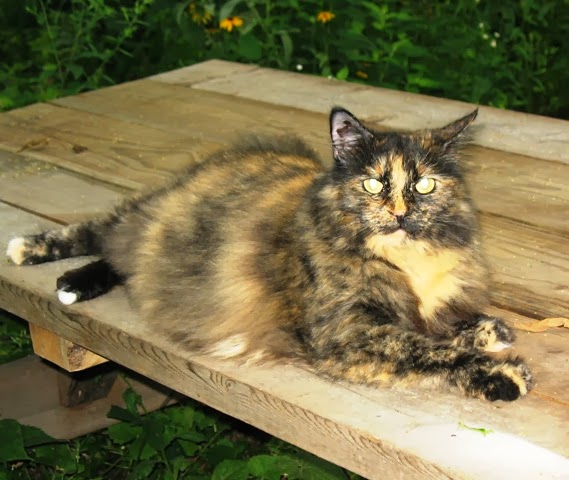 Cutie went back to live where she was born, and is loved and happy. She and Grendel the Slasher found they weren't compatible. A little too much jealousy there on both sides and both were unhappy.

We will always have a cat. This garden has seen a succession of them, and we have loved them all. The first to live here in this house was my younger daughter's black cat, Midnight, who came with me to live here 25 years ago. He was already aged, and has been long buried under a patch of Virginia bluebells in the woods. Midnight loved the garden too, and spent many happy hours hunting and taunting squirrels. He was another sweet, wonderful personality. Several years passed before another cat came into my life to stay, and that was in the form of a small grey tiger female we named Jasmine--Jazzy for short--who was very pregnant. We kept one of her kittens, a half-Maine Coon male whom we dearly loved. It was so much fun watching Jazzy teach him to climb a tree when he was just barely 12 weeks old. She would go up, and call, and he would follow, then she would back down and call, and he would do the same. It wasn't long until he was at the top of the tallest tree in the garden, and knew how to get down! His name was Sebastian. When I opened a bead/store studio here, he would meet the customers in the parking lot and bring them to the door of the studio. Jazzy disappeared one day, I think she just moved on, having accomplished her goal, raising her son and making sure he had a good home. Sebastian died on his tenth Halloween, for no apparent reason. Perhaps a heart attack, or other natural cause. He was a beautiful delight for every day of his life, and we miss him too. 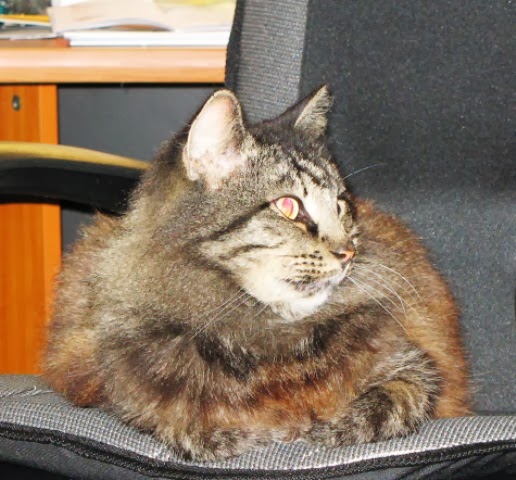 Grendel came with my husband when we married in 2003. She was three years old, and already feisty and cranky. She looked so much like Sebastian that they could have come from the same litter, tho she was several years younger. 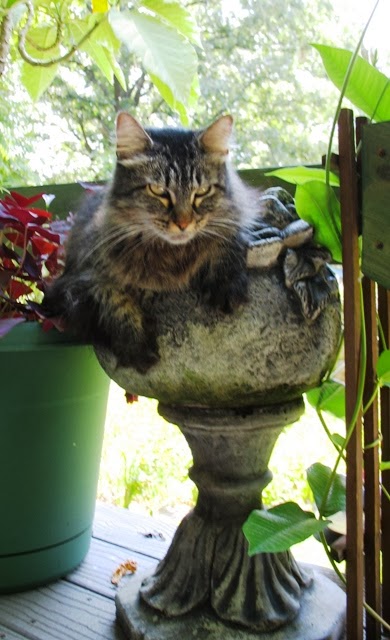 Potted Cat: Hey, Slasher, that's too small for you!


She has never met a box or basket or shoe she didn't like, and we still find her in all kinds of silly places. She is aging now, too, and seldom goes outside any more now that her companion Ras TiFari is gone. In her younger days she was an intrepid vole hunter also in spite of her lack of claws. She still has teeth, and she knows how to use them! Wary should be the mouse that dares to come into this house, as she is a good mouser too. She got sick right along with Ras TiFari and we thought we would lose her too, but I think she was so worried about him that she made herself ill. She lost weight from her 11 pound, chubby self and nearly stopped eating along with him; after he was gone, she gradually began to put on a pound or two, but she is still painfully thin. Cranky as ever, though missing her pal and nemesis. She is too old, irrascible and jealous to adapt to another kitten, we think, so there won't be one for the rest of her lifetime, even though the temptation is great.

There have been other cats who passed this way. A sweet, old, abandoned lynx point Siamese gentleman, who spent his last two years with us when his owners moved away and left him, ill and alone; he told us his name was Sukey. Another very old Siamese, Tia, who belonged to an elderly relative who had to move to a home where she couldn't have a pet; they were both great cats. 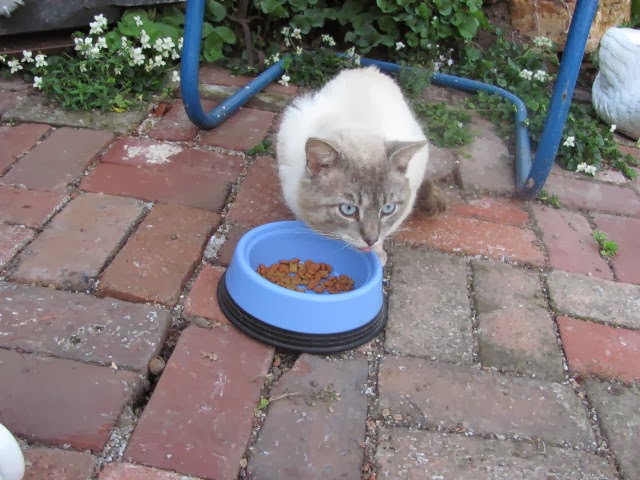 A pair of twin white kittens, who lived across the street were abandoned when their people moved away. They lived with us for a few months; very sweet, affectionate little boys. One had one blue and one green eye, and we think he is profoundly deaf. They were inseparable, and I think the hearing one took care of his handicapped brother. They went to live with three little girls who love them dearly. 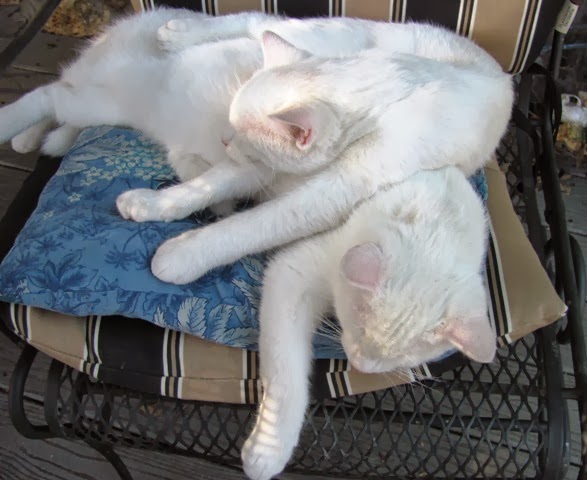 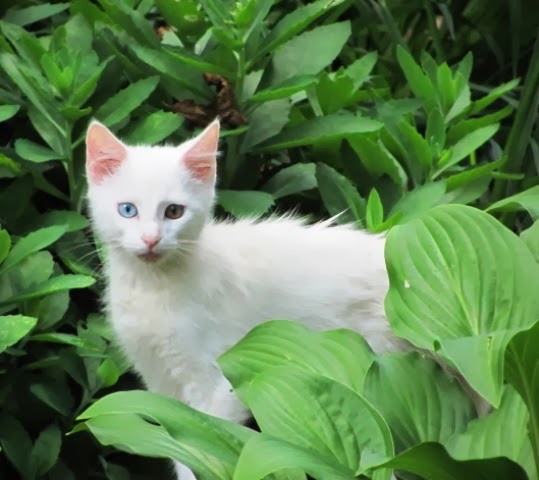 I think cats instinctively know where they can find help, and Ras RiFari brought a few home with him, including Sukey, knowing we would be kind to them. He had a lot of cat pals, one of whom is a friendly neighbor cat who has made our garden part of his territory, now, and visits me often for pets and ear rubs.  He hasn't told me his name, but he, too, has become one of a long line of garden buddies. He stood watch near the house all the time Ras TiFari was ill and stayed close by whenever Ras could be outside. 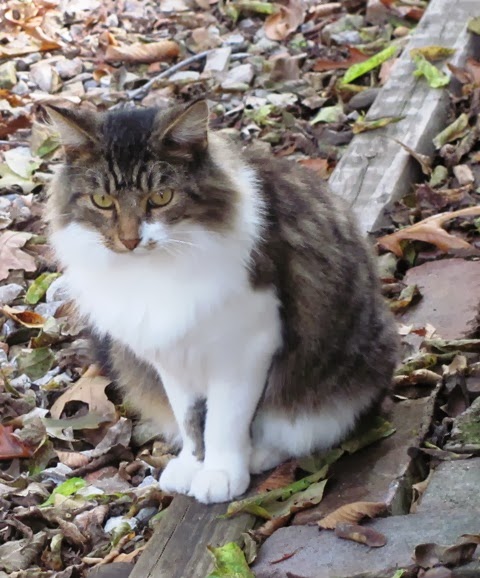 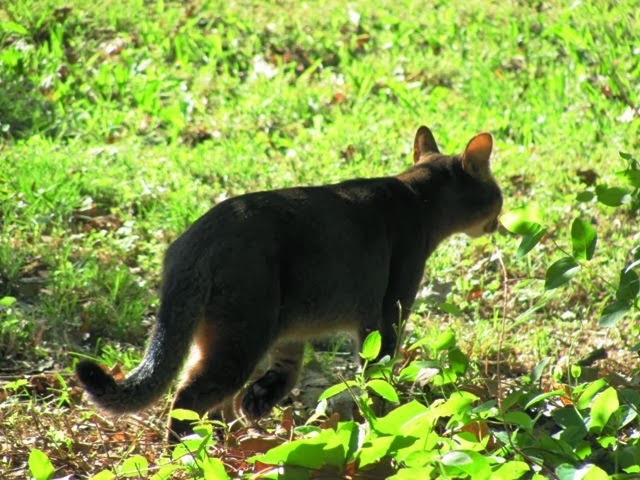 
Until one has loved an animal, a part of one’s soul remains unawakened. ” - Anatole France
What greater gift than the love of a cat.”
― Charles Dickens

Time spent with a cat is never wasted.”
― Colette

“I believe cats to be spirits come to earth. A cat, I am sure, could walk on a cloud without coming through.”
― Jules Verne

There is, incidentally, no way of talking about cats that enables one to come off as a sane person.”
― Dan Greenberg

"A cat improves the garden wall in sunshine, and the hearth in foul weather." - Judith Merkle Riley

"No amount of time can erase the memory of a good cat." --Leo Dworkin

"A true cat lover cradles a newborn kitten and knows that 9 lives will never be nearly enough." --Author Unknown