Mother Nature did some heavy pruning here in the Ozarks last week with the ice storm, and left a huge mess. In all fairness, she will eventually clean up after herself, but most of her human children don’t have the patience to wait while she takes her own slow time about it. Some residents began the cleanup immediately, but we didn’t have any inclination to get out there in all that ice, and besides I hate the cold. It freezes my toes and fingers, and makes my joints ache. We were lucky this time, no big limbs or trees fell on the house, power lines or cars that needed immediate removal, though I know many people were not as fortunate.


It seemed better for us to wait until the ice was gone, when we could tell what was actually damaged. Trees that were bent over double and appeared to be done for popped right back up once the weight of the ice was off. We spent one afternoon picking up fallen branches and litter so we could walk in the area safely to see what had to be done. Chaos is a designated National Wildlife Federation habitat garden, and we keep a brush pile at the end of the woods as shelter for small wild critters so we have a convenient repository for storm debris. 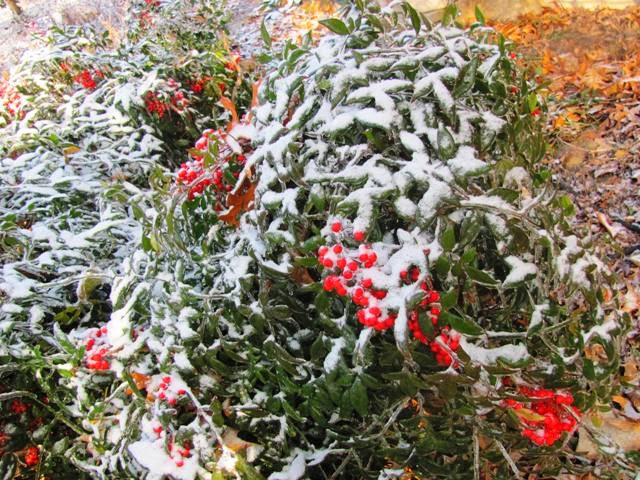 Nandinas down, but fully recovered. 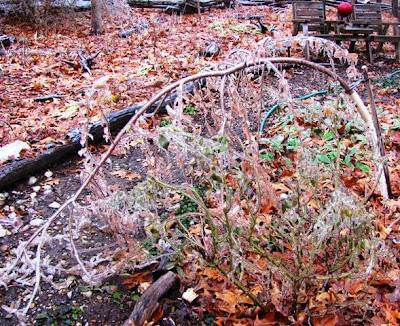 
A couple of trees have to come out; an old Washington hawthorn cracked at the base and toppled, and a young wild redbud fell over in the woods. The hawthorn had fire blight every year, so it won’t be much of a loss. The redbud won’t be missed either as its location was too shady for it to bloom well. A Japanese maple might replace it. 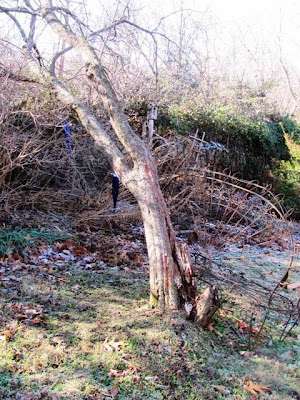 Hawthorn has to go!


A huge branch is partly broken off a hackberry, touching the ground over a hosta bed; it’s going to take some finesse to tackle it. I’ll have to cover each hosta and perennial to keep us from treading on them and crushing the crowns. Daffodils are already coming up everywhere, but being stepped on will only bend the tips of the leaves. The flower buds are at least a month away from showing.


Where branches broke off the trees, the stubs should be pruned back to the branch collars at the trunks to keep out rot and disease and enable them to heal over, at least as many as we can reach.  A big lilac trunk that broke will have to be removed at the base as it would likely die back anyway. “Widow makers”, as large, broken. hanging branches caught high in trees are called, have to be removed; it is dangerous to work or walk under them.  Where they are too high for us to reach, we will hire a professional tree service to do it.


Much of the work can be done easily with pruning saws, loppers and a chainsaw. Jim’s experience as a nurseryman and landscaper gives him the know-how to do it though he isn’t eager to tackle the high stuff anymore.


But before you dash out to your nearest Husqvarna dealer and slap down your credit card to buy a chainsaw, safety first! Never let amateur enthusiasm rush you into taking a chance with something that could hurt you; if you don’t know how to handle it, hire someone with experience instead. If you must tackle the job yourself, don’t even think about going out there without gloves, safety glasses and a hard hat. Make sure the assistant that is hauling off branches is watching what you are doing and you also know where they are so they don’t get in the way of any random branch-tossing; or there may be bad words spoken and angry stomping off causing you to have to finish the job on your own. Keep your kids safely away while you are working on big stuff. They can be pressed into slave labor later to pick up small branches and twigs, or if they revolt, be paid for it.


Valuable post-storm clean-up information can be found on the University of Missouri Extension website: http://extension.missouri.edu/p/g6867.


While we are at it, the rest of the plants that were left for “winter interest” might as well be cut back as the ice laid most of them flat anyway. I’ll bundle Echinacea stems and others that still have full seed heads and hang them on the fence for the birds to finish cleaning out. Ornamental grasses can be cut back to about 10 inches tall, and perennials to about 6 inches, leaving just enough to hold the fallen leaves that mulch them through the winter.


When the cleanup is all done, I can sit back and dream over the garden catalogs that have started coming in the mail, at least until Mother Nature has another snit that has to be tidied up. But Mom, no more ice storms this winter, please!

"How can those who do not garden, who have no lot in the great fraternity of those who watch the changing year as it affects the earth and its growth, how can they keep warm their hearts in winter?"
- Francis King