Making scents of the garden in winter


Even though the sun is closer to the earth in winter than it is in summer, it seems wan and far away, due to the tilt of Earth's axis making the sun's rays hit our planet at an acute angle. The garden seems bleak and tired, and the one thing that is unexpected in the midst of winter is a heady perfume; but walking down through the woods a most tantalizing scent wafts under my nose. It grabs me by my senses, swirls around my head and beckons me with intoxicating aroma like the Sirens of ancient Greece lured ancient seafarers with their song.


It isn't going to be so dramatic as to lure me to my death on the rocks, however, as the Sirens did the sailors; unless I trip on the stone edging of the path getting to the Viburnum x bodnantense "Pink Dawn" that is the source of that wonderful smell so I can bury my nose in their blossoms. They are marginally hardy in our zone 7 but this one has survived here for four years. It's one of our zone-pushing successes: so far. Flowering with rose-pink clusters on bare branches, it can be a magical, spectacular sight on a winter's day. Early honey bees out scouting nectar on warm late winter days love it. With sufficient rain, blooms may start in November, continuing through March. If you are lucky enough to find one to buy at a nursery, plant it near where you frequently walk, so you can enjoy it close up. Viburnum Pink Dawn makes an upright shrub to ten feet tall that arches gracefully as it gets older. In fall the leaves turn a burnished bronze. It likes some sun, and though it grows well under an oak in this garden, too much shade will cause it to lean outwards to reach the light. 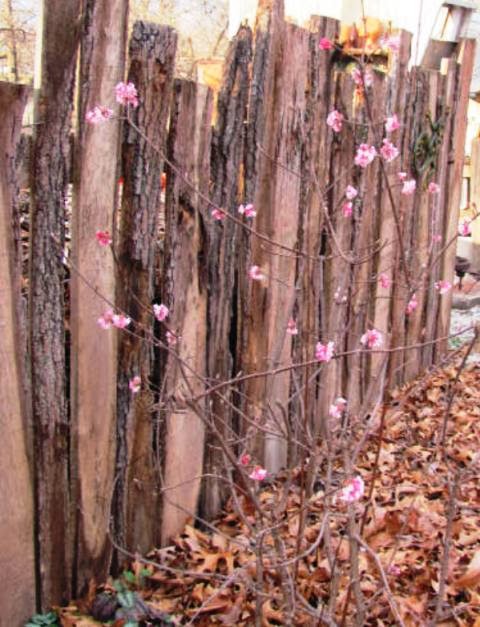 But that isn't all. Further on along the woods path, I get another tug on my nose, and I see our native hamamalis (witch hazel) has burst out with shaggy, spidery yellow, delicately spice-scented flowers. This small tree is one fondly remembered from the woods where I grew up back in Michigan, with hard little nut-like seed capsules that burst open explosively in autumn; sending shiny black seeds some 30' feet from the parent tree. Hamamelis is a medicinal plant; the source for soothing witch hazel lotion. In addition to our native variety, there are several cultivars; the most common one found in nurseries is hamamelis x intermedia "Arnold's Promise" which has larger large yellow flowers in midwinter than the native. Other types have yellow and reddish orange flowers, blooming variously from late autumn through early spring. Most make an upright shrub or small tree to about 12’ tall with brilliant yellow leaves in the fall. Full to part sun and plenty of moisture bring out the best in them, though they will tolerate the drought in our Ozark summers. 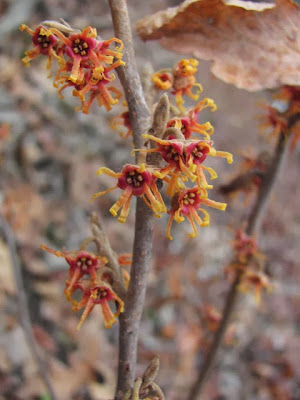 
Hamamelis is the source of soothing witch hazel lotion. Its witchy name probably comes from the Anglo-Saxon wych, meaning to bend, referring to the use of its forked limbs as divining rods, when the tip would bend as it located water. Early settlers Native Americans using hazel branches to find underground streams, and from there the practice of dowsiing became widespread and was exported back to Europe.

Up close to the house there is another winter bloomer: jasmine nudiflorum. I can catch the sweet smell of it standing on the deck fifteen feet away from where it grows on the arch over the herb
garden gate. It resembles forsythia, but its yellow flowers are highly scented and appear in January.The long vining canes have to be tied to a fence or trellis to keep it off the ground, otherwise wherever it touches soil it will put down roots and sprout up into another plant, making a thicket of itself in a few years; much like forsythia also does if left to its own devices. Winter jasmine loves the sun and refuses to bloom at all in shade. Despite being listed as zone 8, it has grown vigorously here for 20 years; but a deep freeze in January after the flowers have begun to open will turn them brown. Most years we get lucky and just when we're longing to see flowers, there they are; their bright yellow glow warming our souls if not our bodies, making the January sun seem a just a bit less pale.

The days are short
The sun a spark
Hung thin between
The dark and dark.
~John Updike, "January," A Child’s Calendar, 1965