Come take a walk in the Woods With Me 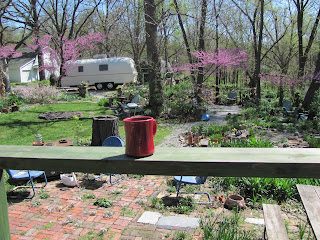 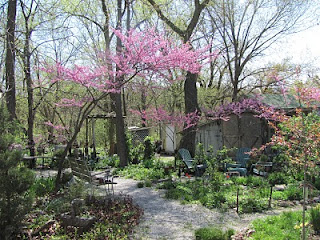 Grab a cup of coffee and let's go out to the woods! Redbuds create magenta bowers that beckon the way down the path, past the studio, under the pergola, through Virginia bluebells that make you careful of your step, and really look at what's at your feet. Stop and sit for a minute in the secret garden patio on the left, and enjoy the hellebores, celandine poppies, tulips and violets; and listen to the wind chimes. 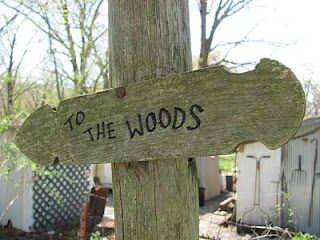 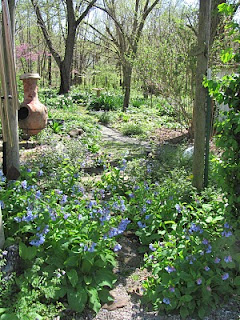 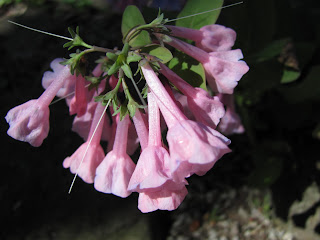 Oh, look! A rare pink Virginia bluebell! I love it when Nature surprises us with her diversity! 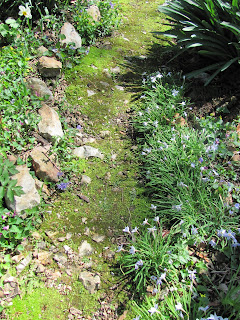 .The mossy path is as soft as carpet under our feet. I love to walk barefoot on it! 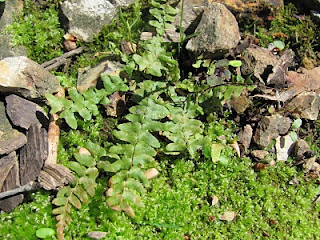 A tiny fern has made itself at home on the edge of the path. 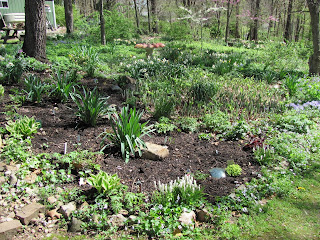 This new bed wll have hostas and a variety of astilbe, coral bells, tiarellas and ferns. The tall plants are surprise lilies ( Lycoris squamigera) that bloom in late summer. Behind this bed is a big colony of giant Solomon's seal (Polygonatum commutatum, var.), just coming up. A  young white redbud (cercis canadensis alba) is in the background. It is too small to see, but there is a baby redbud in the center of this bed, behind the big clump of surprise lilies. It will be beautiful in a few years. Redbuds are native here, and most of ours have planted themselves.
A tangled mess of  Virginia waterleaf  ( Hydrophyllum virginianum) had to be eradicated here, but no fear, it is everyplace else in the wood. See that patch of green to the left and above? Yeeeah, there's more! The bright green area at the top right is yellow archangel ( lamium galeobdolon). It's beautiful when it blooms but really aggressive. Lets's see how long I allow that to stay there!  It carpets the ground under a huge hackberry tree and yellow twig dogwoods. 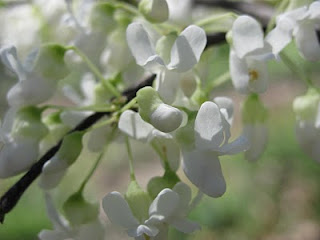 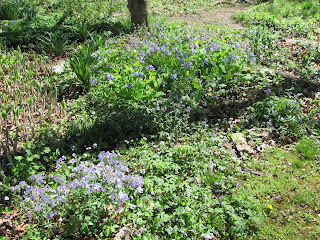 Woodland phlox has started blooming, and here is another stand of Virginia bluebells.  It is a beautiful morning and the sunlight slanting through the trees gives a ethereal light to the forest floor. 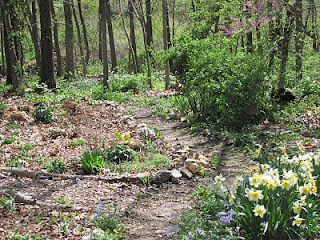 To the left and just out of sight, a bald cypress/dawn redwood cross (taxodium X zhongshansha Nanjing Beauty) will one day shade this area. A tiny Japanese maple (Bloodgood) is on the right behind the daffodils and a white dogwood is behind me. Another dogwood, Cornus Kousa, will be visible through the trees and to the left, as will an oakleaf hydrangea. This whole area (and most of the rest of the woods) was once a huge tangle of honeysuckle and euonymous that we have spent years eradicating and reclaiming. Woodsy perennials and shrubs (and more hostas, what did you think?) are planted here but this bed is only three years old and not filled in yet. Most of the perennials are still not up completely either.
There are half a dozen dogwoods scattered through the woods also, but most are too young to bloom for a year or two yet.We have also planted  a catalpa, a witch hazel, an Arkansas black apple, elderberries, bird cherries, Tiger Eye sumac, a couple of viburnums, blueberries, pussy willow, buckeyes and nandinas as well as azaleas, both evergreen and deciduous. Privet, wild burning bush and bush honeysuckle were already  here, but seedlings need to be carefully weeded out to keep them from taking over. A huge mock orange is a remnant of the original owner, the only one left of a forest of them. The big trees are all native: hackberry, various oaks, black walnut, hickory and wild cherry.  At one time, this area was totally cleared, some 50 years ago, and a vegetable garden and orchard was here. The last of the apple and peach trees died in the late 1980's. Morel mushrooms still come up in the area where they were, in a good spring. None this year so far, tho! 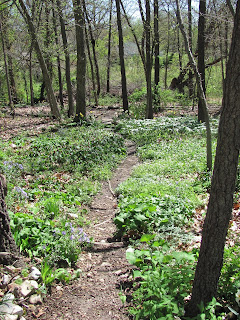 This is the original wildflower patch that was planted (added to) some 25 years ago.Crested ireses, yellow adders' tongue, bloodroot, trilliums, toothwort, false rue anemone, woodland phlox, violets, wild ginger and a host of others make their homes here along with the mayapples and Solomon's seal.
False Solomon's seal (Smilacina racemosa) is up and will be blooming in a week. This plant was a native
here. 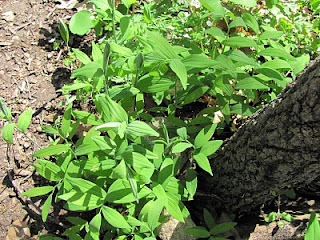 Dutchman's breeches (dicentra cucullaria) has colonized through the area. (I'm trying to remember to give the scientific terminology but I still love the old common names the best!) 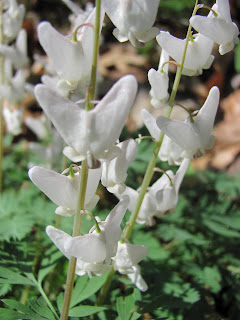 Would you believe that this colony of Mayapples (Podophyllum peltatum) started with only three plants? Giant  variegated Solomon's seal is in the background. 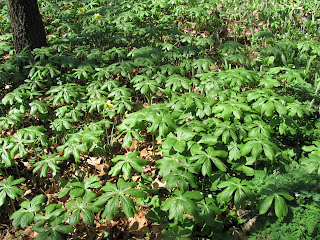 Wild ginger (asarum canadense) and tiny woodsia ferns are a thick groundcover. Did you know that wild ginger root can be candied and eaten? It smells and tastes like tropical ginger but is very mild. 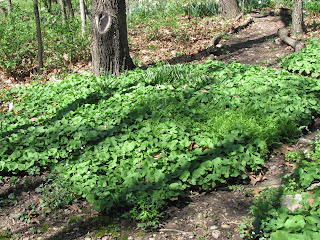 Gooseberries, remnants of the old garden patch that was here, bloom early and are a favorite of the bumble bees. Wish I could have gotten pictures of the bees, but I have an elbow bumper who likes to spoil my best shots. (See below) 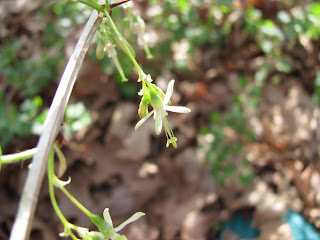 Shhh! Don't tell anybody you know where this is!! A friend gave us seeds of wild ginseng (Panax quinquefolius) a year ago last fall, and a few plants came up. We thought we had lost them in last year's drought, but I guess they just went dormant. Here's one! There are only a few so we are never gonna get rich off our 'sang patch, but it's fun growing them! It won't be harvestable for 5 or 6 more years anyway.

Crossing the dry creek. Mosses are getting well established, as well as lots of ferns and wildflowers. The dry creek is in its third year. It was all honeysuckle before then. 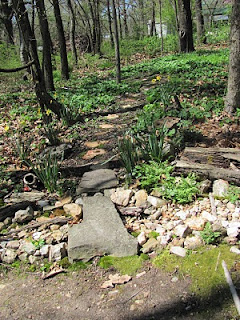 Four out of eight serviceberry saplings we planted along the edge of the woods last fall will bloom this spring, and they are all alive! They were transplanted from a bush near the house that was threatening to take over its entire bed. It is capable of making a grovefor itself.  Serviceberries are loved by the birds for the sweet, delicious berries (or so I'm told, but I haven't been able to get any of them! It was the first tree planted at Mt.Vernon by George Washington, and the berries are reputedly delicious in pies. If you can beat the robins. 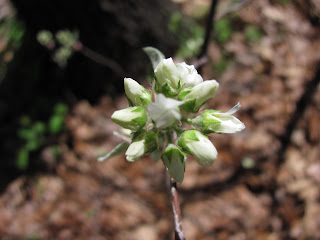 A side tip: to keep the robins out of your cherry tree, hang a wren house in the branches. Wrens don't eat fruit, and they are territorial little scrappers that will drive other birds away!

The oak trees are blooming. The wind took down this  twig last night. Soon there will be a yellow haze over everything from the pollen. 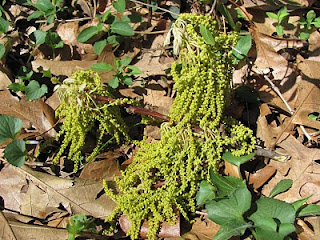 I know there are purists who don't like to mark woods paths, preferring to keep them "natural" but after visitors to the garden persisted in wandering off  paths and tromping thru stands of delicate wildflowers, I opted for stones and fallen log edgings. 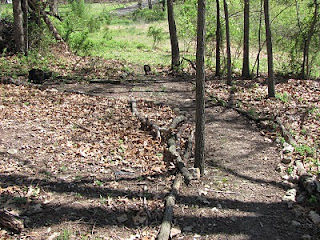 The cats are ready to go in to the Back Beyond, but that is for another day!
Though the white lilacs beckon, my cup is empty and it is time to go back. 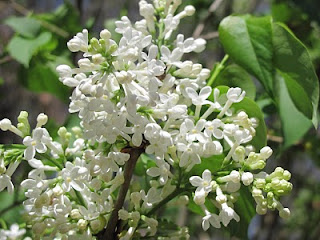 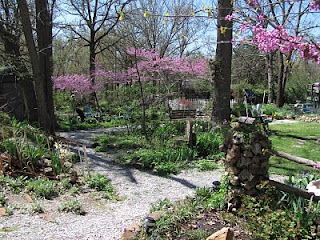 Thanks for joining me! I've loved visiting with you and sharing my woodland patch! I hope we can do it again soon! 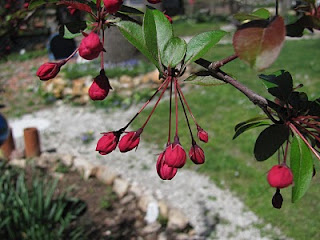 Prairie Fire crab tree buds
"When I was a child, the woods was a magic place
Where acorn caps were elfin hats
And lilies of the valley were bells
that played for fairies to dance."--S.P.
Posted by Isadora at 12:24 PM