Outwitting a Robin, Hawk Wars and Birds in Concert

He' s not much afraid of me, that fat red-breasted fellow strutting along the paths in the woods.  He cocks his head and keeps a beady eye on me until I turn my back, and then he promptly flips over every bit of loose moss he can find. I'm not sure if he really thinks there may be a tasty worm under there or if he is just playing a game with me and likes to watch me put it back. After all, he just checked it a few minutes ago, and he knows what's under there.. I'm not much appreciating his sense of humor! 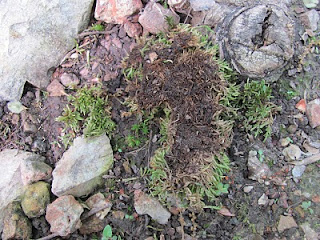 But I'm smart, too. And maybe I can outsmart that feather brained wiseacre. I have an secret weapon. Somewhere, a long time ago, I acquired a box of vintage hairpins, and I am going to pin that moss down! 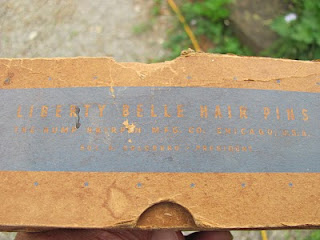 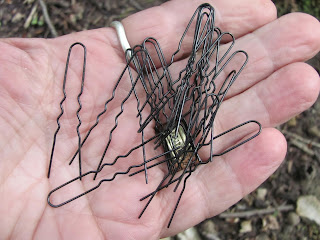 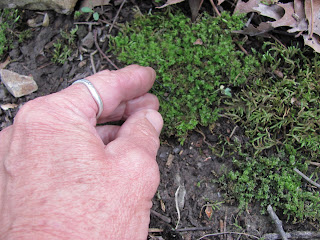 The pins will just rust away. Ha! Take that, you feathered bandit!
Fade to this morning
Well, there was a lot less moss in the middle of the path and an lot more still fastened down. I missed a few pieces, but of course, Cock Robin didn't and flipped over every one that was loose. By mid afternoon, he had it figured out that he could just shred the moss to pieces and get it out that way. But not all of it! So far, I'm calling it a draw. I've still won some, there is more left pinned down than he has managed to tear up. At least if it's in bits he will just scatter it, and it will take hold where it falls. Then he can't flip it over!  I think I have learned that spring might not be a good time to transplant moss. Next time I'll wait until fall when Mr. Redbreast has flown south for the winter! (I have noticed that it isn't the female of the pair that's doing all the mischief, it's the male. She must be too busy with her housework and raising a family to be out there causing trouble!)
More bird drama, this time in the air. Hawks and crows are having a war! Several times a day a hawk comes screaming over the woods, with crows in hot pursuit. Whatever it is that he has done to offend the crows, they are definitely bent on running him out of town! Today there were a pair of hawks, and a whole murder of crows, circling and diving and chasing above the treetops. I think the hawks are nesting in the woods Out Beyond; tomorrow I will walk out there and see if I can find their tree. I'm not sure what kind of hawk it is, just that's big, so it might be a redtail or Cooper's hawk. They are moving too fast when they fly over for an ID! 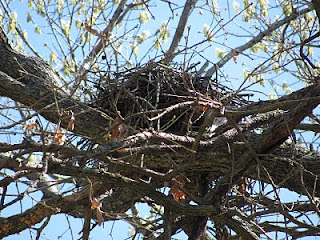 I haven't seen anybody home here yet! This might be a crow's nest.
A mockingbird has taken up residence in the oak over the house, at least for his sound stage. When he opened his repertoire with a bob-o-link song, and followed it up with a whip-or-will, I knew him for a bird that has been around. His concert lasts a good 30 minutes, and I don't think he repeats anything, including a few cell phone rings in there. He is a dancer too; with every third song or so he leaps a couple of feet into the air and lands launching yet a new riff. Yesterday a robin in the walnut tree joined him and there were bird duets in stereo! What an awesome concert that was! 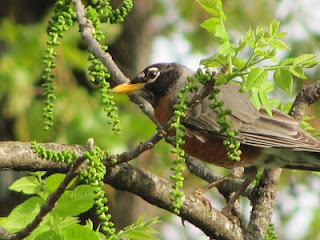 I guess I forgive him for the Moss Incident.
"Let us be like a bird for a moment perched
On a frail branch while he sings:
Though he feels it bend, yet he sings his song,

Knowing he has wings"
--William Blake
Posted by Isadora at 11:35 PM