I used to see her wandering the south lawn, tall and grey headed with her hair pinned back, wearing an old grey pocketed sweater over a print house dress straight out of the 1950's. Although she wasn't young any more, her back was straight and her step firm. The first time I saw her, I thought one of my elderly neighbors had come to see what I was doing to the yard, and I stepped out the back door to say hello. But she wasn't there. I walked all the way around the house, and saw no one in the yard at all, so I just chalked it up to my over-active imagination, thought I was seeing things, shrugged and laughed a bit at myself, and went back inside.

She was back a day or two later. This time I just watched her for a few moments. She walked along the bed in front of the stone wall where I had planted a row of lilacs, stopping now and then as if peering at the ground at her feet. Then I turned my head away for a second; and when I looked back, she was gone.

She came quite frequently at first, every time I did something different to the growing flower beds; or when I cleaned out and weeded one of the old beds. I tried to follow the original rock borders, saving as many of the old perennials as I could find. It seemed as if she was inspecting my work, curious to see what I was doing, if it met with her approval.

She came less and less often as the garden progressed and began to thrive again under my hands. The renewal of her beloved plants must have satisfied her, for I haven't seen her for many years now.

I found out later that this lady who built our stone house, dug the basement single-handedly, and raised several children in the one-room cabin that was still standing when I moved here (later torn down) loved flowers and would spend all of her spare money (which wasn't much) on what new plants she could find for her garden. She raised a big vegetable garden and orchard where our woods now stands, clearing rock on the hill (no mean feat in the Ozarks!) so she could till the soil.  Piles of rocks still exist in the woods, as I often discover when trying to plant something; and the fencerow is (now) two feet high, three feet wide and running the length of the back of the property, along what was the garden (about 200') of rocks. 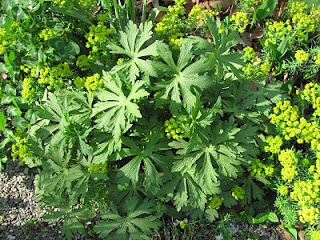 Euphorbia and wild geranium
Back in those days, I spent a lot of time at the library checking out garden books, and I must have been following in her footsteps as she set about to create an English garden. I could see some of the combinations she used, straight out of the pages of those books; a ferny green euphorbia with yellow flowers, planted with wild geraniums; mock orange with lily of the valley.

There is still a hundred feet of powder blue irises that smell of grape Nehi soda, interplanted with orange daylilies, that runs the full width of the front of the yard, a good 10' wide. It is a glorious sight in May! She planted naked ladies (lycoris): (the progeny of which are now in nearly every bed in the garden), probably every variety of iris she could get at the time, daffodils in abundance that bloom from the earliest yellow in February, to doubles, poeticus, and others that don't open until the first week in May. I have no idea of the names of most of them. 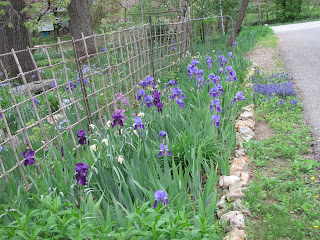 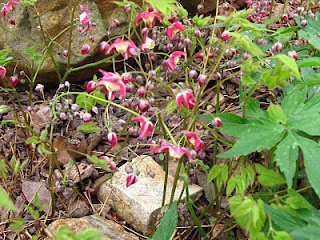 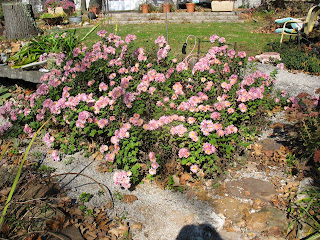 Chrysanthemums, October 2009
There are still epimediums, grape hyacinths, (now in glorious abundance), phlox paniculata, star of Bethlehem and peonies; a chrysanthemum that opens creamy yellow and ages to pink--and spreads agressively! Perennial sweet peas are also part of her legacy. There is some variety of (maybe) Louisiana irises that have an open, flattish purple-blue flower, deep roots and colonize with abandon. A Seven Sisters rose, that has now gotten somewhat out of hand, used to adorn a rock cornerpost in the front yard. Now it clambers up a redbud that has sprung up nearby. Several smoke trees, including one very old and gnarly individual, seem to be original, as well as a hawthorn with some wicked nasty thorns. And not to be forgotten, the tulip magnolia that was so beautiful this spring, a deeply pink dogwood, and white lilacs. 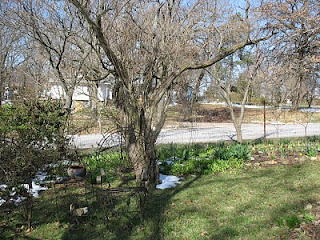 Grandfather American smoke tree (cotinus) March 2010. I expect every year that it won't leaf out, but it always does. 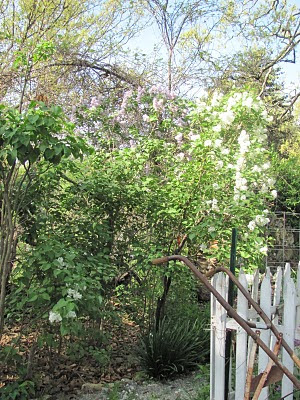 Ancient white and purple lilacs
Blackeyed susans live here too, and coneflowers, columbines (Granny's bonnet doubles), giant toad trilliums, spiderwort, nandinas, scarlet honeysuckle, autumn clematis, forsythia, and crape myrtle "colonize freely" all over the place. I haven't forgiven her for the ground cover euonymous, but I live with some of it. So far. (One huge vine on the stone wall has a trunk the size of a man's leg, so you know how long that has been here!) My neighbor two houses down the street who has lived here since she was born, talks about the tall hollyhocks that used to bloom above the wall. Even though those are no longer there, I still have their descendants growing down along the herb garden fence. 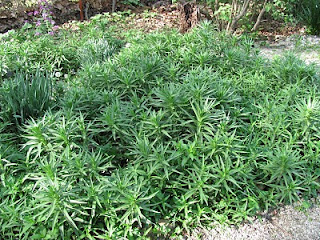 "The panthers of the meadow,tiger-lilies". -Titus Munson Coan
And the tiger lilies! They stand a stately 5' tall when they bloom, hundreds of them! They reseed freely here and there and I never know where to expect another one among the garden beds!

I mourn the loss of some plants that seem to be irreplaceable, expecially a yellow dwarf daylily (hemerocallis) that bloomed in April (it just disappeared one year), I have tried to find a replacement but it may be lost to the nursery trade. I still keep hoping it will show up somewhere in the garden  A lovely white Japanese viburnum simply declined and died one spring. There was another pink dogwood that graced the backyard but it succumbed when a black walnut grew into its space, and they disagreed with each other. Dogwoods and black walnuts just can't seem to get along; probably because of the alleopathic chemical juglone produced in the walnut roots. 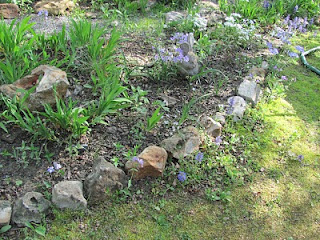 I know that she traveled, and brought back seeds and plants wherever she went, as well as rocks and seashells that she embedded in the stone walls of her house. She made piles of interesting rocks under trees, perhaps leftovers from the house walls; and used them around her garden beds.
She didn't like dogs, and fenced the whole yard to keep them out, and to keep her cats safe from them. As far as I know, there was not a husband in her life, though there must have been at one time. I don't know what happened to him. 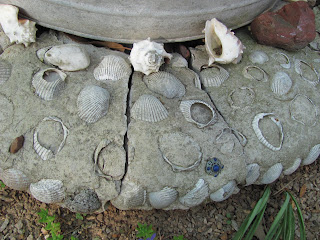 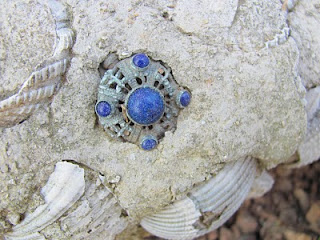 There was a concrete birdbath, embedded with shells, stones and bits of jewelry. I have found most of the broken pieces and used them as a surround for a tub of yellow water iris. 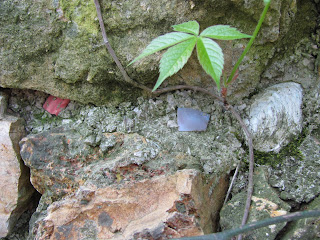 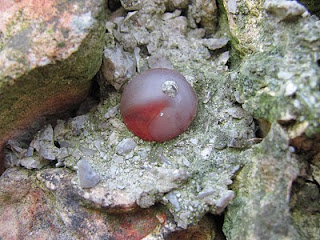 A stone wall runs a hundred and some feet on the south, and all sorts of things are embedded in it--pieces of dolls, more jewelry bits, marbles, pieces of glass and china, and shells. 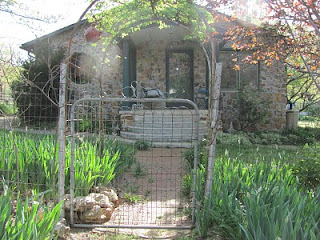 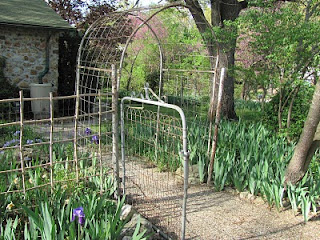 The original wire arbors over the front and side gates are still here, and most of the fences around the house. There are only remnants of the fence around the woods, most of it having rusted away, though I still find buried pieces of barbed wire from time to time. I've found intact dishes and small perfume bottles in the soil, and once I found a set of wedding rings, deep beneath a tree that had to be cut down. (Now there might be a story!) Other finds include a pair of rusted cap pistols and just yesterday we discovered an old wrench that finally surfaced on a woods path. We usually hang the metal artifacts on the studio and toolshed walls. 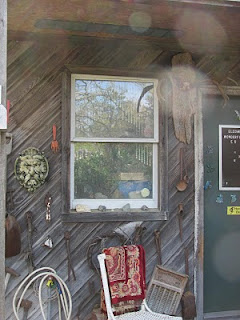 The siding on the studio is cut from tongue and groove boards that clad the one-room cabin. Board and batten ceiling from the old structure was made into a cupboard I use on the back porch for garden sundries, boots and gloves.
Sometimes I wish she would come back again for another look. I would like to know what she thinks of her garden now. I miss her, this lady I never had the chance to meet but feel I know so well. I live with her in small ways, every day, for her personality is stamped upon this house and garden as surely as our own. She would have been a good friend.

"Where is heaven? Is it not
Just a friendly garden plot,
Walled with stone and roofed with sun? "
--Bliss Cameron
Posted by Isadora at 7:01 PM