Running out the squatters, or whose house is this anyway!

There was an almighty big fuss in the hackberry tree this afternoon. A pair of very agitated bluebirds were protesting angrily anat the top of their lungs about something. A squad of juncos came to see what the fuss was all about, and there seemed to be a chat and the juncos flew away. So did the bluebirds before I could see what had happened. I looked around for the cat, but none was in sight, and there were no snakes. I even thought it was me they were fussing about. I took a walk into the woods where they usually hang out, but I didn't see any of them.
So I went back to work clearing out flower beds, and out of the corner of my eye I saw a red-bellied woodpecker in the hackberry, checking out the hole where woodpeckers have been nesting for the last two or three years,  tho last year it was a hairy woodpecker; and all of a sudden, the bluebirds were back, scolding and screaming at him, and I realized what the fuss was about. Seems there is a housing conflict going on! Bluebirds sometimes nest in old woodpecker holes, and apparently they had found it vacant and either had moved in or planned to. I don't know how it is going to play out, but when the fuss died down again and I looked up, this is who looked back at me! 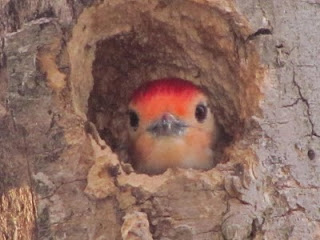 She flew off after I took her picture. I intend to watch tomorrow and see who wins. I don't know if there are bluebird babies in there or not. 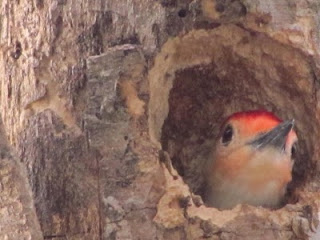 This is the first time since we have lived here that I have seen bluebirds here during nesting season, and I know there are other pairs nesting somewhere else in the woods edge around us, but I haven't spotted their tree yet, exaactly. There are several trees with woodpecker holes. They haven't used the nesting boxes so far. 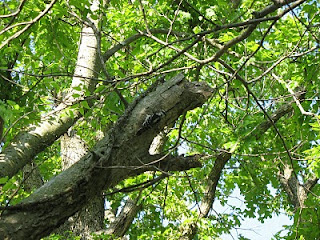 This was last year's tenant!
Posted by Isadora at 9:15 PM