Ah, the darling buds of May! 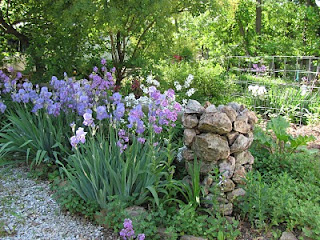 Seems like summer has sprung, full blown, from the hopeful days of March and April. Spring has flown by on beautiful gossamer wings, flitting off in such haste that has left me shouting, "Wait! I'm not done with you yet, I didn't get to see.....where are you going so fast?" Already the roses are overnight bursting into full bloom, and the rhododendrons haven't even finished opening up. 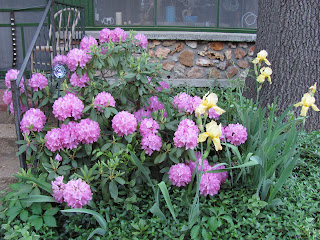 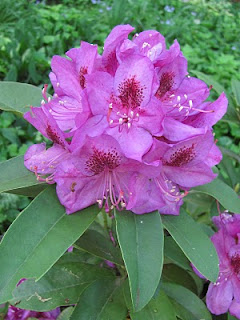 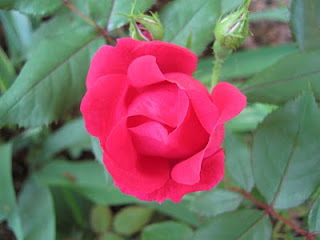 Red Knockout Rose!
We have been gone for 4 days, at the Tri-State Gem and Mineral Show here. It was an outdoor show, and it alternately rained, hailed, and gusted windily (is that a word? ha!) except for the last day, and most of it it was absolutely miserable, wet and chilly. So coming back to the garden was truly a marvelous adventure. With the rain and a couple of days of sunshine, everything seems to be twice the size it was a week ago and dramatic changes are everywhere.

And what a year for the irises! I am in love with irises, this time of the year. (Of course I am in love with whatever's blooming, at any given moment!) The newer cultivars are absolutely gorgeous, but I think I love the old varieties best. Some of the new ones don't seem to have much fragrance, which to me is the soul of the flower. Like with roses, all that hybridizing seems to have removed the essence and just left the lovely faces. 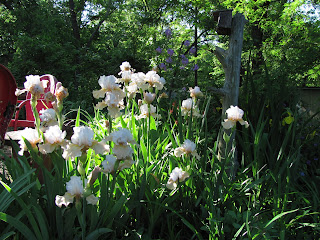 One of my favorites, an antique that started blooming again after I divided it and gave it some sun.
A new combination has struck me like a revelation: I am going to save seeds of wild columbine and scatter them in the bed of yellow iris for next year. 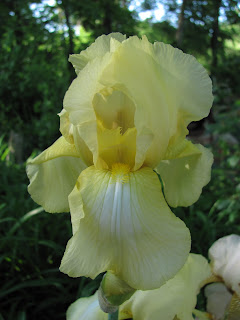 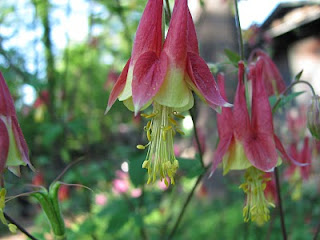 Won't these be pretty together?
The wild roses are blooming in the woods, scenting the air for blocks around. Kind of makes up for the scentless Knock-outs, which I love for their beautiful, don't-need-any-coddling ways. Therese Bugnet has buds, but being somewhat shaded by lilacs that have grown to tower over her, is just going to be subtle these days. Plus, I found a caterpillar chomping merrily away at her the other day, and it had already stripped a couple of branches. I removed it to a wild rose where it can chomp to its heart's content and not do any appreciable damage. 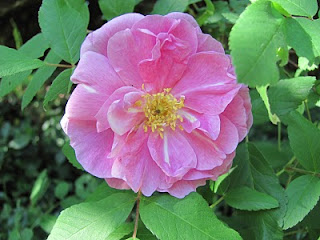 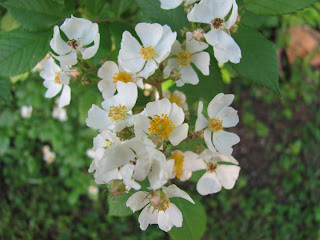 The wild roses are multiflora roses, a type of rambler introduced from Asia
to the eastern United States in 1866 as rootstock for ornamental roses. Beginning in the 1930s, the U.S. Soil Conservation Service promoted it for use in erosion control and as "living fences" to confine livestock. State conservation departments recommended multiflora rose as cover for wildlife. More recently, multiflora rose has been planted in highway median strips to serve as crash barriers and to reduce automobile headlight glare. However, because if its tenacious growth and rapid spreading ways, both through seeds and its habit of tip layering its log canes, it has made its way to the noxious plant list and is a scourge of farmers everywhere. I don't think there is anywhere it won't grow; sun, shade, open fields, woods, gardens; and it is lethal to mess with, having prodigious thorns that catch everthing within reach and rip clothing and flesh alike to ribbons if it has a chance. Its saving grace are the wonderfully scented white flower clusters, and the only reason I keep it around. When it is done blooming, I will arm myself with leather rose gloves and a sharp pair of pruners, and reduce it to about a three-foot mound (currently, they are reaching 8 feet and still climbing!) and while I'm at it, I'll dig out its new tip-layered progeny. It will spend the rest of the summer regaining its size, and next spring again be covered with buds. (I'll have to look out for cardinal nests, they like it because it's safe from marauding cats in there!)

A wild pink dog rose grows by the edge of the wood and I've planted a beach rose that I got from a friend who summers in Maine. It too is a thorny, dangerous thing that spreads, but more of a ground cover type. I don't know its botanical name. It needs to be kept in check with a firm hand also but it's single deep pink flowers are wonderful.

Speaking of cardinals, I don't know where they are nesting this year, but last year a silly pair built a nest in the magnolia tree right over the path off the deck, just overhead on a low branch. They spent the entire nesting season scolding and fending off anybody who walked under it, and frantically swooping at the cats everytime they came anywhere near the tree. They did successfully raise their family but are not back in the  same tree this year! I think they learned from experience and may be nesting in the euonymous that grows above the stone wall, away from any human and feline threat.

I've added a few more plants to the woods this week. It took some hunting, but I finally found stoloniferous tiarella, hostas and toadlilies to add to the wildflowers. I have plenty of the clumping tiarella wherryi varieties in more disciplined parts of the garden, but in the woods I want them to spread and form colonies. 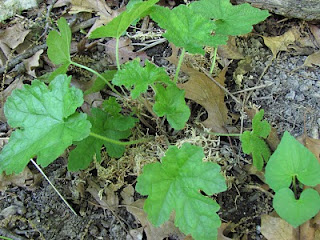 Tiarella cordifolia should colonize by the dry stream.
The last leaves of adder's tongue (erythronium) have disappeared for the year, and the path is open again. Part of today will be spent moving wild phlox out of it to a spot where it won't get stepped on. Wild ginger and ferns have almost completely covered another path and need to be relocated. It's still not too late in the season, and it's supposed to rain (again!) this weekend so that will be good for them. Butterbur (petastites) and giant solomon's seal that I moved last week are perky and happy already in their new homes with more wild phlox and ginger, surrounding a pussy willow and an old mock orange where only poison ivy and honeysuckle used to grow. 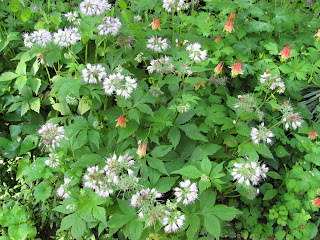 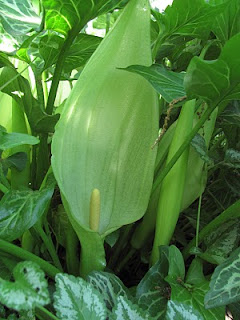 Arum Italicum Pictum in bloom. You have to look under the leaves to find this huge flower! 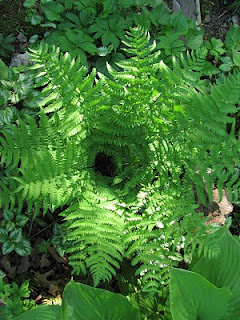 I love the way this fern is opening up! 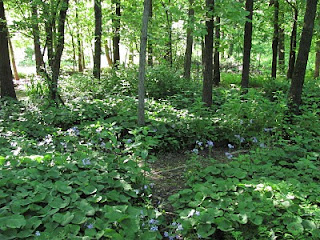 The woods has changed to summer dress. Some of this ginger has got to go! It will be transplanted to another area or donated to a friend's garden. 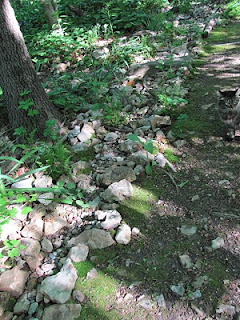 The moss along the dry creek is well established, in spite of the robins and brown thrashers. The woods is my favorite place to be. I often put aside my pruners and weeding tools and just sit on the old bench, listening to the birds and enjoying the serenity of this sacred space. It's the first place I go in the morning, savoring my coffee in the dappled sunlight, and the last place I visit at night when the air is cool and dim; listening to Nature speak to me in whispers of soft wind voices telling me deep secrets of the woods. 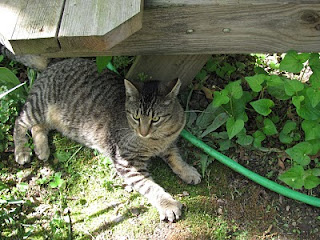 A visiting neighbor enjoys the garden too! Or maybe he just comes over for the petting. 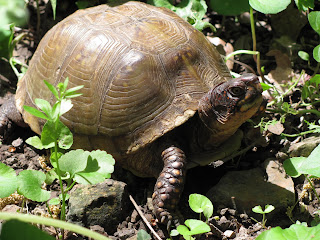 A local resident out for a stroll among the violets.
Every day is an adventure in the Chaotic garden!
"Nature is a mutable cloud, which is always and never the same."
--Ralph Waldo Emerson
Posted by Isadora at 6:42 PM