When you plant something and it gets all yellow and disappears that same summer; and it doesn't come up again the next year, you know it's dead, right? Well apparently not always! I planted a golden seal (hydrastis canadensis) in a woods bed a couple of years ago, and in spite of what I thought of as proper care, it left me and I just assumed it didn't like my conditions. Though what conditions it would like, I could only guess, as I gave it the humus-rich woodland soil it is supposed to want. I was hoping to get a start on a "very large colony", as my Misouri Wildflowers book hints of, but I thought, alas, not to be.

Not so fast! For three years later, as I'm weeding the area, I find this, the original plant tag still right next to it: 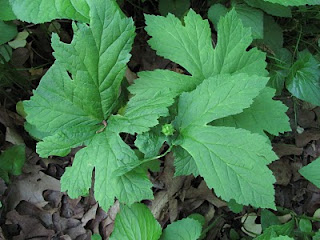 And with a bud, no less! It must have been lying dormant, growing a root system all this time. I have read that it demands moist conditions but it doesn't really get that here, so it may be more adaptable than the books say. (The same books also say that Virginia bluebells like moist conditions but I find they grow in most any woodsy soil, and in my gravel paths just fine.) I'm assuming that it may act like many other native woodland plants, which go dormant when the summer gets hot and dry, resting and marshalling their forces, developing root systems underground with no energy output used in keeping leaves alive; until the next growing season. Ginseng (Panax quinquefolium) does the same thing, disappearing in July or August to reappear in spring twice the size it was the previous year.
I am going to be careful to watch for the ripening seeds, and scatter them in a couple of other places in the woods, including one spot that stays a mite damper than others, and see if they come up. The flower blooms a sort of non-distinguished greenish white, fuzzy little ball of stamens and pistils with no petals, that soon turns into a compact cluster of scarlet berries. If harvested, they should be planted fresh, or they will develop a double dormancy that takes 2 winters to break (just like ginseng again), coming up in the second spring.
Goldenseal is one of the valued medicinal herbs that is harvested for its horizontal rhizomes. A long-lived herbaceous perennial of the deep woods, the root resembles a small, crooked finger. The name is derived from the golden yellow color of the rhizome and clearly identifies it from all look-alikes, of which it has many. Goldenseal root contains an antimicrobial constituent which is used in treatment of upper respiratory infections. In small doses it is also said to be a stimulent to digestion and tones the digestive tract.
Goldenseal and ginseng are both often illegally harvested in the wild, which decimates native stands.  Raiders risk heavy fines from conservation agencies, and possibly a pants-load of buckshot., as growers of woods patches guard their valuable crops zealously. On the other hand, planting as a cash crop is encouraged and seeds of both are readily available. It does take several years before roots are big enough to harvest, often 7-9 years. Kind of a long time to wait! 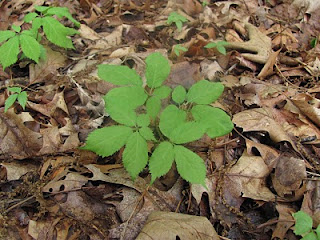 Ginseng, in their second year. The tiny plants in the background are first year plants, the seeds having gone through the double dormancy period and come up the second spring, even though they were all planted at the same time. It will be several years yet before these babies are big enough to be harvested.
As for me, I don't plan on getting rich from my tiny patch. I just grow them for fun--and to see if I can!
For more information on growing both these plants, here is a useful link:
http://www.hort.purdue.edu/newcrop/newcropsnews/94-4-1/ginseng.html
"Nature does nothing in vain."
--Sir Thomas Browne
Posted by Isadora at 10:38 AM