Perfumes and Other Delights

April has put on her party dress. Dogwoods, redbuds, cherries and crabapples are flouncing their fancy petals and the air is rich with heady perfumes of viburnums and lilacs. Some early blooming perennials are getting in on the act, and the freshly cut lawn adds a top-note of clover and new-mown hay. 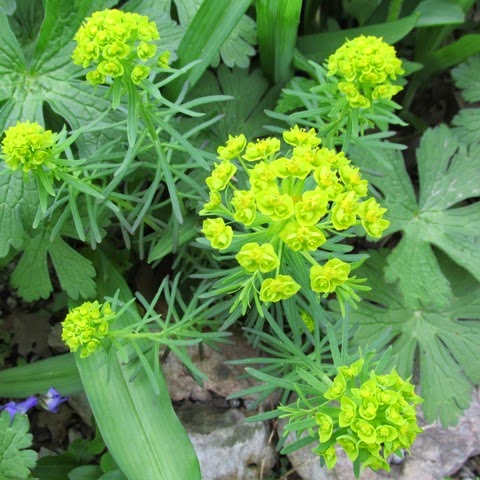 I find myself making excuses to weed near honey-scented spurge, growing by the front gate. Euphorbia cyparissias , with blue-green, ferny foliage and  acid-yellow flowers is buzzing with bees and the smell makes me long for buttered toast and honey.
Possibly a Mediterranean native, it may have been brought to New England sometime in the 1800’s, and is now found all over the US. Though reported as invasive in many areas, it has spread only gently in this garden over the past sixty-odd years, and makes a delightful ground cover with hardy geraniums and daylilies when it blooms in April and May. 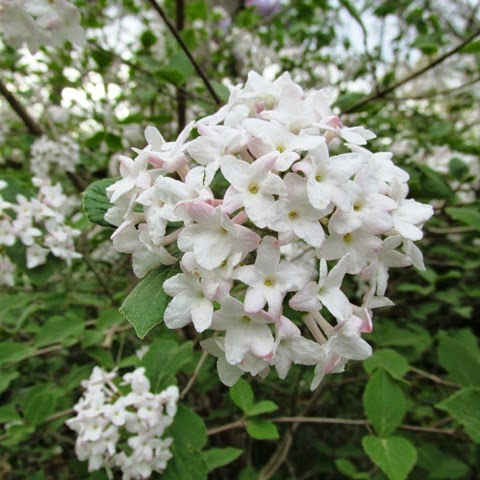 But the one that perfumes the entire garden is viburnum carlesii, Korean Spice viburnum. This one is viburnum x Juddii, a heat tolerant variety that does well here. Nearly six feet tall and about as wide, it grows in front of a border of French lilacs, and the combined aroma of lilac and viburnum that wafts across the garden on the slightest breeze is pure heaven. The fragrance is sweet, rich and complex; cloves with a hint of vanilla, grabbing me by the nose and pulling me deep into one of the beautiful, waxy pinkish white flower clusters which cover the shrub from to bottom; hoping I don’t meet a bee on its own quest. In fall the leaves turn wine red, and if it had a nearby pollinator, which this one does not, there would be purple-black berries.

Like most viburnums, it has been a slow grower, taking nearly 15 years to reach its full height from the two-foot shrub I planted with high hopes and less patience than I needed.  As author and plantsman Michael Dirr says “Viburnums, like fine wine, require time.”

The viburnum family is a big one, some 150 varieties and cultivars, a four or five native to North America. A few are evergreen. All bloom in spring, and are easily confused with the hydrangea family due to their similar size and flowers. Most viburnums have pure white flowers, and one is even a lace-cap type, which further adds to identity confusion.  But hydrangeas bloom later in summer, are often blue or pink as well as white, and need more shade than sun-loving viburnums.
Common Eastern snowball (viburnum opulus sterile), with its familiar huge white flower balls, has been grown in American gardens for a couple hundred years, and is one many of us know and love. A snowball bush can get a good 8 to 10 feet tall,  no shrub for a small garden. We were given one several years ago, and planted it altogether in the wrong place, but by pruning it severely we've managed to keep it under 6 feet. It does sucker from the roots and keeps us on our toes making sure it doesn't gain too much ground. Four sprouts were divided off and planted along our fence line three years ago as a screen between our woods and the neighbors; this year they are about 5’ tall and blooming, making it one of the faster growing viburnums. This variety is sterile and produces no berries.

The natives tend to be tall, almost tree form, reaching 15’ to 20’ in height. Rusty blackhaw, with pink-purple berries in fall and burgundy fall foliage, moved into our woods many years ago, and provides us with fruit without fail. It does want to colonize, however, like many native shrubs, and if we aren't careful, we’ll have a forest of them in no time. Native viburnums are loved by butterflies, bees, caterpillars, birds and mammals.

Viburnums are easy to grow; all they need is average soil and some sun, though many will grow in part shade. They are a fussy bunch when it comes to pollination, however. Most are not self-fertile, which means there must be two different cultivars to cross pollinate for fruit, but they must also bloom at the same time. We planted a v. dentatum “Blue Muffins” for its striking clusters of pink and blue berries, and another variety of dentatum nearby, but so far, there hasn't been any hanky panky going on as no fruit have been produced. But it’s still young, flowering for the first time only last year so there are still expectations. I want to plant a couple more different varieties; sooner or later we’ll hit on the right combination for cross pollination and there will be berries for wildlife. Different varieties are not needed for flowers; that will occur whether pollination happens or not. 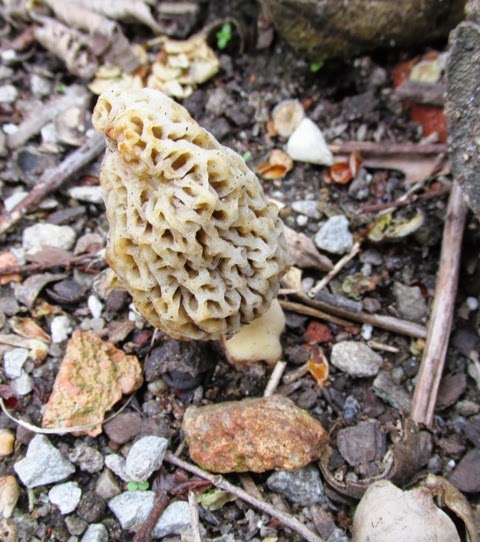 I must be hungry, because with viburnums and redbuds blooming, I'm reminded it’s morel mushroom time. These delectable, mouth-watering delights pop up overnight after a good rain and when night-time temperatures reach 50 degrees in April. They are usually found hiding in woods under dead leaves over decaying tree roots, notably apple and elm, but we see a few each year in our gravel paths along roots of an elm we cut down years ago. From all reports, this year is a good one for morels, so we need to go hunting in our own secret spot--and get the frying pan ready!

"Again the April bloom is flinging
Sweet odors on the air of spring"
-----William D. Gallagher
Posted by Isadora at 9:57 PM